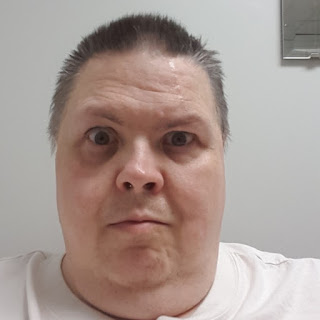 Well this is me in the laundry room last night. I normally go late at night to avoid people. Not because I don't want company, but I have a LOT of chemical sensitivities. A lot of laundry soaps and all of the dryer sheets bother me badly.

But last night I went down at 9pm because I was getting very tired. I normally sit there and just watch YouTube Vlogs and/or listen to podcasts, but this time there was others using the machines.

All but one of the washers was in use. So I had to use one I don't like as much as the one I normally get, but it's all good - I just have become convinced the one washer does a better job, although I'm kind of sure I am just imposing this and it's not actually true. Us humans do this a lot it seems.

Anyway all the dryers but one were being used so I had to wait a moment to use one. It was about 10 minutes I think. I had just enough time to watch one Vlog then someone came and took their stuff out. One machine was broken BTW so could not use it.

Then not long after I started my dryer going a fellow that has a bit of trouble with the machines opened my dryer and stopped it. He was looking for one to use. By this time one other was open for use.

I had no idea he had stopped mine because I was watching YouTube. So when I went to check the time on the dryer it was not running - started it and went back to my Vlog watching. I'm certain he did not know that it would stay stopped - as I say he is not good with the machines. In fact a lady was telling him how to use them.

They where talking loud so I could not hear my Vlogs over them and they machines going - so I came out of the reading room and talked for a while.

There was a fellow watching soccer in what we refer to as the dining room. At fist I had no idea he was watching something and thought maybe he was having some issue. He seemed agitated  when he came into view and was a bit angry. Then I went for a can of coke and realized he was just wound up over the game - Mom used to do this all the time when we watched CFL football.

The heat in there was oppressive to say the least. I'm willing to bet it was almost 40C in fact. I was sweating like crazy and my clothing was soaked. I sweat easy however, so ya know, it's not normal.

I had an issue with some personal lube that caused me an issue in a certain spot (you can imagine). So it is sore (day 3 of it hurting today) and the sweat seemed to make Little Dave a lot more unhappy. This in it's self is a story, the lube is water based and designed to not cause irritation. Take it to me to be allergic to the safest lube on the planet.

The first thing I did when I got to my apartment after was to shower then put my laundry away. I then put one some clean clothing and watched TV while drinking half a 26 of Rye Whisky I had left over from some time back. I got drunk of course while watching movies - I think you can tell in the reviews I posted on YouTube LOL.

Well before the sun comes around to my side of the building and I have to close the blinds, I'm going to have another cup of coffee and enjoy the day for a moment.

BTW have I mentioned lately that I love this building? It's quiet and only one person seems to be a dick, the rest are very friendly on average. Also not having to do stairs is a blessing to my broken body. Anyway, peace be with you.