I'M A NUDIST AKA I HATE MY CLOTHING 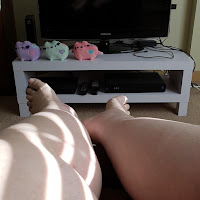 If there is one thing in this world I don't like, it's having clothing on. So when I'm alone, I don't have any on at all. Alone at home that in. It's a bother when someone comes to the door though - I have to yell "just a minute" then go put on some pants and a shirt.

When I was living at home, my Dad, my Brother and I after 9 pm would remove all our clothing and run around the hose with nothing on. All the blinds shut of course. Mom on the other hand would literally never do this - she would hide in the bedroom and put on her night gown. I never did ask her why she did not join up. I sure it had something to do with being raised in a strict Catholic home and the shame that goes along with that.

In my younger days (20's and 30's) I was working, making good money and spent a lot of time on my days off at nudist friendly places. Yes there are actually a few of them in Saskatchewan. I also spent a lot of time with friends on their out of town lot doing nudist things.

I do however keep the clothing on when others are staying over. I don't want to make people uncomfortable or freak them the hell out.

I'll have to admit something here. Because I've been LARGE for most of my life, the boringly average sized man bit I have don't look all that big with a pad of fat being him. But I just don't care.

When in nudist friendly places, this did not seem to draw the least bit of attention. But then again nudists are all about loving your body no matter how the hell it looks. It's also not a sexual thing to us to be nude or see people nude.

I know my brother may just have taken part in the nudist community in the places that he lived over the years, but I'm not certain. I do know however that my Dad never did, he just did it at home.

It's been a good 14 or 15 years since I been to a nude event. I don't know anyone anymore that does it at their home (they all moved away now) and the pubic arias are all out of my reach - I just can't get to them. I also can't afford to go to one anymore and the free one up north is a LONG walk that I would not be able to make.

I'm kind of sure most people online and in real life who know me, know all this already. I'm also kind of sure that MOST of them do not share my ability to not give a shit what people think about my body.

Society has places the "evil" stamp on nudity. We look on it as wrong and we look upon the body as shameful for some reason. I think this does a great deal of harm to people personally. I know that almost all the nudists I have known where people who loved themselves and had a great self body image.

In any event, I'd like to know if you ever spent time at a nude event, or gone nude at home, or been to a public nude friendly aria. Bonus points if you have been on a nude vacation (I never travelled for it).

P.S. I actually did hate the way I looked as a teen, but I got the hell over that in short order in my 20's.