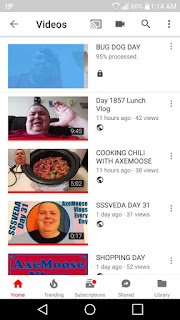 Gee Willikers, just when I thought YouTube got it together and stopped with the hanging up at 95% processing there it was again. It's been ages since it was going this and never did it again after. But I have had issues where it would not start uploading for some reason. In that case I would have to convert the video before it would go up. Being they have tossed in this 2 or 4 minute "preparing video" shit, I don't know why this happens. After all what the crap is it doing for all that time if not making the video able to be uploaded?