Maple Bugs On My Window 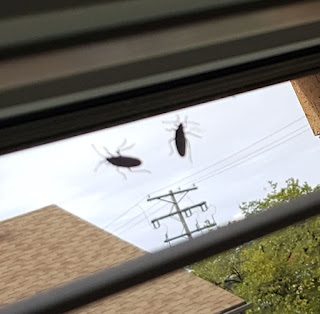 These freaking things are Boxelder Bugs also known as Maple Bugs (city is filled with maple trees). The live almost entirely on Boxelder or Maple trees as far as food goes.

The like the warmth of the building and even if it's 102F outside they will be all over the building for more heat. That's what triggers their hatching - heat cycles.

They will die off in the cooler days then come back in plenty when it gets hot again. So they come out more than once a year.

They also get into the house no matter what you do. They come in threw the cracks and crannies. When I took this photo there where about 30 of them on the window.

Iv'e seen the baby ones look like a moving carpet around the base of the tree outside. Being it's neither kind of tree - well I'm lead to believe they eat more kinds of trees than Wiki tells me they do LOL.

They get in and will end up on the ceiling and drop on you or in the coffee on rare occasions. I have to say, I only had to kill about 9 of them this year inside here. In my first apartment they would be in all over the place and I would be killing 5 or 6 a day every day for weeks. So this is an improvement LOL.

They don't seem to carry anything and they don't bite they just spread like a biblical plague. Soon they will be done for 6 months (or less) as the cold is coming.

I have to say I've never actually seem one eating anything ever in my life - that is kind of strange as I've seen millions of them in that time.

As a kid we used to spay them with water that had a bit of soap in it and it seemed to kill them. Being they don't spread anything or kill the plants they are not considered in need of extermination - but DANG they get annoying after a while of swatting them... Anyways - just think of the living carpet of them in your mind as you go to sleep tonight - HAHAHA.