Happy With My Galaxy S7 and It's Otterbox 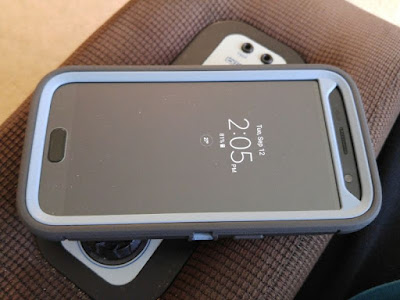 Here is my Samsung Galaxy S7 in it's nice shiny new case (Otterbox Defender). So I get it in there and then notice there is a little speck of something UNDER the screen protector. Man this same thing happened with the old phone and I am not taking it apart to get it out, it's a pain in the ass to get back together.

There where 3 reasonable options with this case, all black the black and gray or 2 tone pink. I took this one. Sasktel had the same case on sale for $85 and this was $32 on Amazon - soooo. I also got a screen cleaning kit with a nice crush thing for removing bits of stuff. That topped it over $35 and I got free shipping.

I don't order nearly enough stuff to warrant prime and I have no interest in watching their shows and movies on the PC or Tablet - I want to watch on the TV and I can't - so it's not an option.

Anywho, the case is easy to grip and has a holster that I will never use. So unless I drop it face down on a big rock it should be fine. I tend to drop the dang thing once a week or so. Doing this in the kitchen or the hall might kill it without the case, so I always get one.

The phone is water resistant so I can drop it in the sink or toilet and it will be fine. From what I read there is a 50/50 chance the phono jack will never work again after that though. BUT who uses it? Them things suck and I have Bluetooth headphones for 3 am music...

The phone is a LOT faster than the LG G4 was and the touch screen does NOT have the issues the LG had, so it's a happy thing :) It does rapid charge but so did the LG and in both cases I turned it off in the settings. It shortens the life of the battery.

Speaking of battery, this one seems to last about 60% or 70% longer than the LG did even with the always on display (clock on the lock screen). In battery saver minimum mode it's literally double the play with time I had with the LG.

Both camera's work well but it was a learning curve to get the dual camera mode to RECORD as it has to be set to record as 1 file or it saves as some strange MP4 with 2 streams in it that you can flip between. No idea why on earth I would want this as NOTHING on earth will let me use it - not like YouTube supports this.

Anyhow phone is a happy purchase and the case is working perfect (dropped it twice already). So Dave Happy.