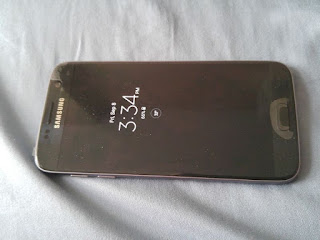 Galaxy S7 running Android 7.0. I like the lock screen displaying the time and weather (I have weather bug) all the time. But to save power this can be turned off. The power saver mode can extend battery life rather well BTW. 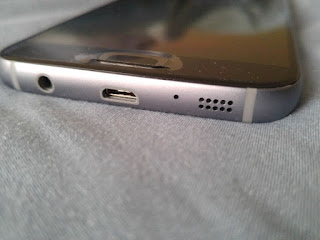 The bottom has the phono-jack, the power jack (usb), the mic and the speaker. The speaker being in this location is not that convenient. Most people tend to hold the phone in their left hand and rest the bottom of it on their pinkie finger - this blocked the speaker. 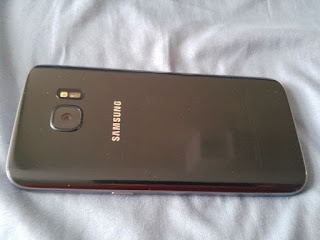 Rear camera with flash and sensor. Can do 4K (UHD) video and takes nice photos in all but low light with no flash. With flash it's not bad in low light. 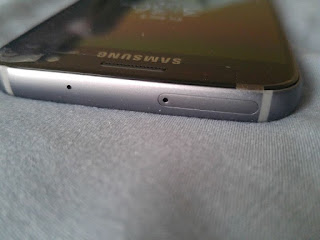 Top of the phone has the slot for the Micro-SD card and the Sim card. It is NOT a dual Sim capable phone. You also see the front camera to the left of the photo. It takes good video up to QHD and good photos in most light but not in low light. There is the standard screen flash for low light selfies. I would recommend a dual brightness LED for low light selfie video or Vlogging - this is something you just don't see often on a phone. Being most people that vlog these days do it from the phone this should be considered.

The S7 is fast enough for my day to day use even in the lowest performance settings - how intensive game use you can set that up higher to get more power out of the device but it will suck battery life and cause the phone to heat up more - if you have it in a case in the summer this might be an issue.

Speaking of heat. I rendered video on it, ran most of my apps and generally used it for 90 minutes non stop (in lowest setting) and there was only a mild amount of heat produced - in fact it was almost not noticeably. The S5 that I had before got kind of hot under heavy use.

I checked out the GPS and tried my darnedest to calibrate the the compass and there was no doing it. The compass stayed 170 deg. out and the GPS was jumping around about 500 feet from my location in high accuracy mode. But MOST phones don't have the best compass or GPS - it is close enough that if I was in a park some place calling 911 they could find me.

Screen resolution can be set to 720p 1080p and QHD. The default if 1080p. I have left it on this setting to save power. Although I turned off the power management because I did not want it to turn off my lock screen display.

In the settings you can set apps to "sleep" when not being used and this will save some power - but if you do this to say Facebook then no badges will pop up to tell you there is notifications waiting for you. It will also save on data this way. So all the apps that I don't want to be hitting the net are in sleep mode when I am not using them.

The storage is only 32GB and in this day and age that seems a bit low but this is NOT the newest model after all. On the S6 they took away the ability to have extra storage and people freaked out so now in the S7 it's back. Being that people tend to take a lot of photos and videos these days this is a good thing and I recommend at least 64 GB or extra storage (it takes up to 256GB). I also put in a fast card (633x) so that transfers off of it with my File server go quick - I do NOT tether to extract photos and video.

It's not that heavy so using it is not a bother, it is also big enough to read at a glance or to watch a video on. As always Samsung has included a LOT of propitiatory apps that you can not remove but they can be disabled.

The phone also comes with a plug that lets you cable it to another phone or to plug in a standard USB stick (memory) to get things off the phone is you like.

The phone has witless and rapid charging capabilities although I never uses rapid charge as it slightly shortens battery life. I tend to charge at night when I'm sleeping so it's not an issue.

Battery life is way better than the LG G4 that I had last and if you don't want the quick display then power saver mode will make it last even longer. It should get an average user threw the day with no need to charge but a Teen or gamer will have to charge more often.

I'm waiting for my phone armor right now so I'm not taking it out with me as I don't want to break it. I will be getting the Otterbox Defender for it. I got this on Amazon for $32 and the same case at the store was $84 so, I'll wait for it in the mail.

With my Sasktel contract for 2 years and on sale the phone was totally free of charge. I had to pay $25 service fee and $25 to get it one month early but I also got a $50 credit on my next phone bill - so it offset the price. In all I'm happy with it.