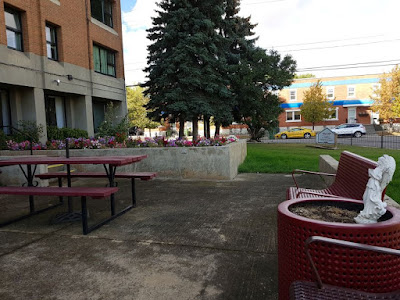 My view the other day as I sat outside. I found it strange I was the only one who took the fire alarm as a warning to NOT be in the building. Most of the people sat inside playing cards or never left their apartments. I was literally the only one outside.

Fortunately it was just some twatt being a twatt. Someone had pulled gone out the fire door in the south stairs and that set off the alarm (it's on the circuit). So it was just some asshat trying to cause a fuss or something.

It did get me outside though and I'm sure I would not have done that if it was not for the fact the alarm went off. Frankly I was not that worried as no one else seemed to be. It was more a matter of the loud sound bothering the hell out of me that made me go out.

BTW I'm reminded of the last time I called 911. For some reason the operator did not take me serious when I gave the address. Well the GPS on my phone is the worst I have ever seen and it had me in a house 2 blocks north of me LOL. I also forget what the black stuff on the cement is - it seems to only like some kinds of stone and old style cement. It's not a mold or whatever - and I used to know it's name... I'm old... Sigh...