More Laundry To Do 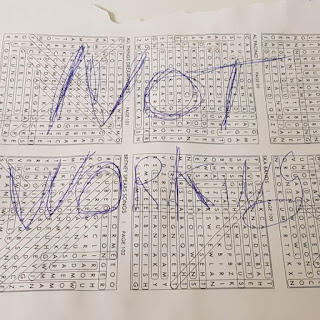 This was on a washer when I went to the laundry room. Seems the actually out of order signs go missing after a while. I have no idea how this happens. Do people just toss them out thinking it's never going to be needed again?

I know the last one ended up a source of amusement. First it was on a blanket for days then it ended up on a wire hanger on the clothing wrack. LOL I'm sure it was a few other places before it vanished.

I actually was going to make one up with a bit of paper and a marker, but I forgot. I'm sure by now it's been replaced with an out of order sign that is more readable as the manager will have been threw there. But when I go to do the towels I will check just in case. If this is still there, I will come up and make a proper one.

The building is filled with tired older eyes and they might not be able to read this. So it would be best to have a more readable one.

Speaking of the wash, I do it after 9PM when no one is around down there most of the time. I don't really like talking to strange people unless I am with someone I know. So the majority of the time no one else is there and I'm safe. That being said I will "boldly" talk to anyone who speaks to me first.

I've had many jobs over the years where I had to fake being a people person. Don't get me wrong, I like to interact on the net a lot with people - but there is a distance that way and it's more easy for me. I have become very close to many people because of the webs and there would not be that in real life that often.

I really should have done both loads at the same time yesterday, but here it is - not done. Oh well, I'll put them on a quick wash as they are not that bad off and there will literally be 3 of them and a face cloth only. The dryer will make short work of them - I use the one that is automatic (I like it best, even if the buzzer scares me LOL).

Yesterday I did a silly thing and had 2 diet Pepsi and felt bloated for an hour. I also spent literally my last $3 on them 2 cans of pop. So no coffee money - that means I'm stuck at home unless someone takes pity on me. More than likely the other Dave will take pity LOL - he likes talking with me after all.

Well in any event, I will get it done not to mention something else at the same time.