Sleep Deprived and CFS at the Same Time 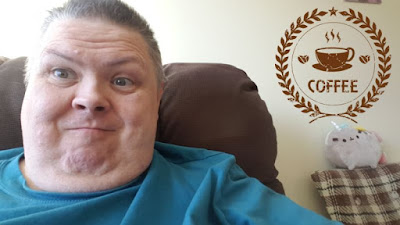 So I've had way too much coffee today and I'm never going to sleep tonight. Well, OK, I don't sleep most nights even if I don't have any coffee that day, it ends up the same as if I had lots of it.

Been doing a lot of late night music listening with the headphones on. It's been a problem on and off for the vast majority of my life, so I don't think it's going to stop happening any time soon.

It all started when I was 10 (literally) and never ended. If I get a solid sleep, it's because I was so tired my body just went into a mini-coma. I will spend up to 10 days in a row with little to no sleep and this last couple of days are worse than normal.

To top it off my body is cramping up all over and as soon as I lay down in bed my legs and back and arms start acting up. Speaking of back there is a new kind of pain that feels like a tummy ache but is in the back not the front. I got not one clue what it is.

But anyway, every single time I been in the hospital they have insisted I take a sleeping pill. You would think it's in my record by now NOT to do this to me. I have had a doctor that tired over the years to reset the sleeping pattern threw drugs - well this never worked.

Most of the time I would end up more awake than I was before I took the sleeping pill. There was only one time that it worked and I was out for 12 hours and missed 8 phone calls from my Mom - the phone being right beside my bed at the time. Well I did not like that and I flushed the rest of the pills. I mean if something where to happen I would not have woken up the the sound of a fire alarm for Gods sake.

The rest of the pills I have tired either did nothing at all or just woke me up even more. This is better than what the one did to my Dad, they made him see snakes coming out of the air vent and freaked him out bad. I had a run-in with the nurse over that as they just kept giving them to him. At least after yelling at someone they gave him a different pill.

You can see in my vlogs as the days of little to no sleep stack up, I get less and less energy in the vlog (not like I ever have much) and start to have difficulty speaking at times.

So in the end it's going to be a toss up between dropping dead early in life and going to some care home early as my brain will be fried from lack of sleep and I won't be able to do things like NOT set the stove on fire.

To top it off I have 2 kinds of tired, the lack of sleep kind and the body don't want to work CFS kind. Some one mentioned "mediation" one time LOL - As if. You actually have to be able to process better than I can right now to be able to get into the right frame of mind. Strange thing is I post the majority of my blogs when I'm dead tired and have come up with some cool art or poetry that the next day I think "I don't remember doing that".

Well I'm going to lay down for a bit as my body is getting to the point it does NOT want to stay sitting in a chair and if I push it another 15 or 20 min. I will end up passing out - I've done this before and know the exact limit I can push it now.

Ha one time I did it in a video chat and someone in the chat knew my address. I woke up with a sore shoulder and a paramedic looking down at me asking if I could hear him - so off I go to lay down a bit.