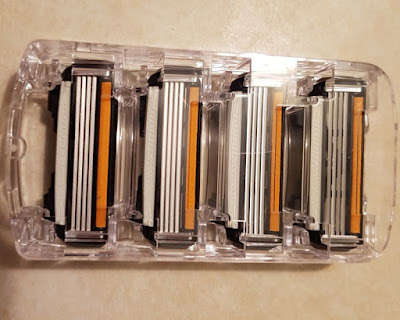 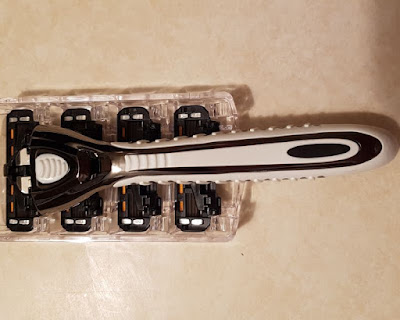 So started in on the Shave Club for Men. I have seen several people love it for the price you pay.

See with the blades I was using (5 blade system) I was spending on average of $18 a month. On this system it's more like $7.22 a month. That is a big saving over the year.

The blades are a bit rough on my skin as it's sensitive as hell - a lot more so than the vast majority of men's skin. That being said, the shave was actually better than the old system I was using. The down side though is this would more than likely cut my head off if I dry shaved and yes I know you should literally never do this.

Being that I only shave every 2 or 3 days I'm going to get them every other month instead of each month. This will be a god send as the price then drops even lower and it's $3.61 a month (after taxes). See the difference here? That is a large saving and worth the minor irritation on my skin that lasts a couple hours.

I shaved the first time (yesterday) with shaving lotion and the next time I'll be using liquid soup like several of my friends do just to see if I can get away with doing that and not have the added expense of shave cream as it's rather a lot more than liquid hand and face soap.

I would give this a try on my head, but I have stopped shaving the thing as I literally can't get it all and it leaves lines on the back of my head that look strange as hell. I have deep lines in the skin so it's not possible to get into them - a minus for being as big as I am I guess.

As well kind of sure that manscaping might be not something I would do with these blades.

All in all I'm going to give them 4/5 for the awesome value and the great shave but it loses a point for the razor burn.

Try it out here: HERE