Pain Medication Seeking - The Other Side of the Coin 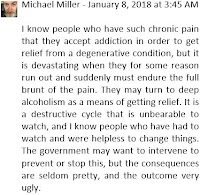 My last blog on the topic was about a person I am convinced (and so are others) is a drug seeker. Well this is about the other side of the coin from the point of view of myself at one time and all too many others I know of that suffer Chronic pain and illness that is not believed by all doctors.

As Michael in his comment to my other blog mentions a lot of people in the realm of chronic pain end up doing things they would not normally do to kill the pain. When it becomes more than you can manage and it is crushing your life what can you do? The only options are death or scoring off the street. This is a sad reality in our society.

Thank God that my pain for the most part is managed at the moment. There where times where for weeks on end I had nothing to look forward to but pain and more pain. I used to get severe flairs that would end me up in bed for days on end and I could not do anything without it becoming worse.

I was fortunate to have a doctor at that time who would prescribe strong medication. Thus I tried a lot of different forms of medication threw his help. Turns out that most of the narcotic pain meds I tried did very little and just made me feel like crap emotionally and mentally. I did not need that at all added to the pain that was not controlled. BTW yes we found one but it was not covered so I could not afford it at the high price of it.

The thing is I was only in need of strong pain meds for a short time then they would sit there on the fridge until I took them back months later to the pharmacy to be deposed of. But what of those who do need them every day of their life?

I know several people because of social media and in real life that suffer a lot more than I ever did. For them pain is never controlled and it's a matter of trying to beg for higher dosages.

Because of an increasing problem with addiction to prescription pain meds, the doctors have decided that there is a reasonable cap to put on dosage and that it should be very difficult to get pain medication on a long term basis.

This is where a pain specialist comes in (I have never been to one and at this time don't need one). They are the ones who decide what you need and if you are a risk for abusing the drugs.

Here is the rub as it where. One of the reasons they may think you are a pill seeker and not actually in pain is a deep understanding of your condition and the ability to talk about it in medical terms. Well turns out this bites people who WANT to know what is happening to them in the butt at times.

I know I have looked up about every thing I could find on Fibromyalgia. Being it's a confusing web of information that is sometimes contradictory to other studies, I have not found it much use to me with the exception of diet - Cutting out beef and pork for the most part has made a large impact on the pain levels.

Now to get back to those who need the medication for the rest of their life. What happens when the doctor says "more will be toxic to your system and we can't give you more"?

What happens is they take more anyway and and up running out of them. Then they are stuck with a vast amount of pain and no relief and the temptation to score it in a bar some place is very tempting I am told.

There are regulations in place where I live that are such that you can't just keep ramping up dosage unless certain situations are at play and they are almost never met. This has left people I know suffering with intense pain at times and no way to relieve it.

On a personal note the hemp oil I was told to try has been working like a charm but is an expense out of pocket to me and I have limited income. For most people I am talking about this is not an option as the pain is to a level that is just too great.

I know many people who chose to break the law in regards to using pot to manage pain and the majority of them find it helps a great deal. For me personally THC is very bad for me and I avoid it like crazy. Yes the "hemp oil" is made from cannabis but the THC has been eliminated from it threw breading of the plants.

A number of people I know are going to be very happy when the law changes and they are able to legally obtain the pot they need.

Still there are people I know of that this is not an option that has worked for them and they are left suffering a great deal of pain that can no longer be managed on the dosage they are on. The ones I know personally do NOT choose to score it off the street as some do.

For those who do break the law to get the meds they need they run a great risk of it being not what they need or being contaminated with something that could be very harmful to them.

There has to be some kind of balance we can find in this situation where people get what they need and the ones who become addicted are treated in a quick and meaningful manner. We can't just keep ignoring people who are suffering a great deal of pain as in increasing numbers they are choosing to end their lives. This is also a tragic ending not just the ones who become addicted.

From what I see though, the public and the government can only see the addiction end of the spectrum and refuse to see the suffering this is causing. More needs to be done and soon.

I'm interested in hearing from you in the comments. Peace.