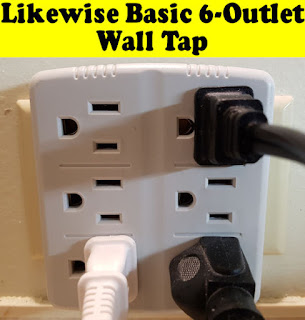 The "Likewise Basic 6-Outlet Wall Tap" was $7.19 at Canadian Tire. Not all things I own could be plugged into this as they would overlap (plug too wide) but most things will fit side by side. Just be aware that larger plugs like the one on my coffee grinder will not fit beside another plug.

It is grounded and plugs into both sockets on the wall. Some I have seen only have the one plug into the wall and it's not as solid as this.

That being said, it does wiggle a bit when you plug things into it or unplug them. I got it so I would not have to unplug my 3 main items in the kitchen. Just the coffee grinder gets unplugged after for safety.

They had the old style Noma ones that fit firmly over of plug face against the wall and if you want something more solid you will be paying twice as much to get it. The lower priced Noma Taps are the same as this, they just have more room between plugs - and are only $1.50 more than this.

I don't really need the extra room to plug things in so I saved the small amount of money. I'm just kind of wondering what years of rocking when I plug and unplug will to to the wall socket.

I have the coffee maker, slow cooker and microwave on this Tap. I will at no time be running all 3 at once so it should be safe enough. The unplugging the microwave all the time then setting the clock on it once again was what made me get this BTW.

All in all it's good enough for the price. As I say, if you want one that does not rock expect to pay $18 or more for it and they might be hard to find - there where none of them in the store - and online they wanted from $27 to $32 for them on Amazon.