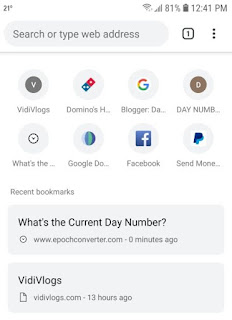 For people with low contrast vision issues this update is a tragedy. As well as people who are only just able to see, this new update is also terrible. Now I only slightly have an issue with contrast personally and I found it to be annoying as hell.

The idea of putting little circles around the icons seems to be a very popular thing for Android everything this last while and I hate it. It makes the icon smaller and harder to see and has literally no value to doing this. If you could group the icons to a color code it would be of use, but no such luck. All it does is make it harder for low vision people to use the device - in this case the most viewed pages.

The search and web address bad is now harder to use because there is almost no difference between it and the background for low sighted people. If it where not for the text it would no longer be visible at all.

I get that you are trying for a "clean look" but this is terrible.

Why on earth is there not a high contrast mode on most popular apps? Or at LEAST a night mode for them? I find it so much more easy on my eyes to have things in night mode - I wish to GOD that all my apps had this, but no such luck.