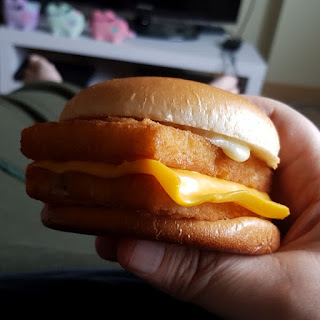 So I eat it and it was crisp and had way too much sauce on it, some of it ended up on my shirt. The taste was a bit bland but acceptable. The bun was not soft, in fact it seemed to be a bit hard to me. The cheese is like plastic but tastes like any other processed cheese slice.

In all I give it a 3/5 - it's passable but it's not great. I honestly think they where more moist when I was a kid and tasted stronger of fish. I also don't remember the buns being stiff like this. It was not a stale taste but yeah - stiff.

As a kid it was the only thing I would eat from them. I hated the burgers. They seem to have changed the fries a number of years back and I stopped liking them as well. The hot apple pie seems to be way to hot inside to eat without harming your mouth or it's cold. It seems to be some kind of magic thing that goes from super hot to room temperature in seconds.

In general I would give literally anything else from them a 1/5. This is generous BTW. Mom loved there stuff though and happily gobbled down the burgers. I would sit there and have a coke and watch her eat. I would rather not have lunch that have McDonald's.

The price was about what you would pay for a better done fish sandwich in a eat in place. So the value gets a 3/5 as well. The only difference is I've had very good fish sandwiches in other places.

I think I might actually have been 10 the last time I had one of these. You see that was the last time Dad allowed any of us to eat one. We all had them that day and he got sick as hell and blamed it on McD's. So from then on none of us could order the fish. Honestly though, we would go months before we went there most of the time then we stopped all together. Mom would never have had them again if it was not for Walmart.

Right now an hour and a half later my tummy is upset as hell. I really can't blame it on the sandwich though. There seems to be very few things I can eat now that don't cause me at least a slight amount of issues tummy wise. So most of the time I stick to my beans and veggies as they don't bother me. I remember having a glass of water one time at a friends and instantly having an upset tummy - so... Yeah I won't be getting another because the price is not great and my tummy obviously liked it less and my mouth did.