GOVERNMENT WANTS US TO PLAN AHEAD BEFORE GOING TO THE ER 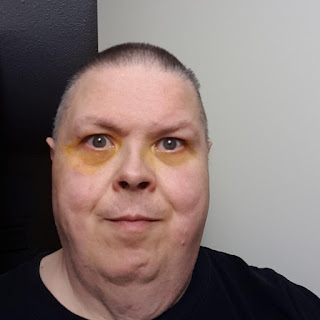 Ended up in the ER about midnight. My eyes where burning like crazy and there was this pin pick sensation in the eyes as well. So I got a ride in.

Well took not that long to get in and out, about an hour. This is good for our ER as normally I'm in there for many hours.

In any event, turns out it's a delayed reaction to something I encountered. That means that I'll never know what caused it. But today it's not as bad and I don't think I'll bother getting the drops he prescribed. They are almost certain to NOT be covered as well, so I'll save the money for my friends big night out instead.

Here is the ticket. A lot of poor people rely on the ability to get a free cab ride home from the hospital. We don't tend to have a lot of money to spend on a $15 or $20 cab ride. You see the hospital instead of being in the center of town is way out on the edge of the city. So it's a long ride back in.

I got a ride in from a friend who would not be able to give me a ride back. A lot of the time it's hard for people like me to get a ride both ways or we end up spending a small fortune to get there. Well to us it's a lot of money for transportation. You see disability (SAID Program) gives you $20 a month for transportation. This is a ride to the ER not both ways.

Now I'm good with my money compared to a lot of people I know on the doll. I am good at shopping and I'm good at not getting out of hand with things I don't need and just want. That being said, like everyone I do get some wants. What I'm saying is the small amount of money I get is not enough to allow me to take a cab that often.

One I go to the store or to the doctor (provided I don't have a friend drive), I'm now well over that $20 they give us. So I asked for a cab voucher. They where intended to help poor people or people who are desperate at that moment to get home. Well I'm poor (I make $1085 a month and $420 goes to rent), so I asked.

I was told that I don't really qualify for the voucher. I was put aback as in the past it was not a problem at all. It's right in my file that I'm on disability. It's not like I can walk several miles homes now is it?

So I told her I can't get a ride at 1:30 am as most peoples phones will be off and my friend could not come get me. The replay made me wonder if she even heard what she said, "you should arrange a ride home before you get here".

Remember this is the ER. How many times do you plan out a trip to the freaking ER? I'd be willing to bet for 90% of people it's never. So where is the logic in this statement? So I'll just put it in my calendar app that I'll be sick on this date at midnight and will have to get a ride both ways. What the actual heck?

The big issue here is not the lack of understanding of what you are saying to the person on the part of the nice lady, it's the government she works for. You see the government has put in place a lot of measures in the health system and social programs to "save money". They need to do this to pay off the massive amount of overspending they did.

In the past they took away some of what thousands of people where getting for disability (me included). This saved them about $40K or so, not the hundreds of millions they needed. The same week they did this a massively larger amount was given to a fast food delivery chain to help they get started in Saskatchewan. They paid it back after popular outcry over it, but others got large handouts as well.

See where I'm going here? Cut funding to hospitals, medical testing, education, transfers to the cities and on and on - then hand out money to try and get some businesses going. Sigh. The entire time screaming "we will not raise taxes". But wait... The provincial sales tax went up, so they did raise taxes. Sigh.

See this government is focused on the business class and not the common person and for sure not the poor. The best part is, they did a hell of a lot better at dealing with the poor than the NDP who claims there are "for the people". The NDP did nothing to help the disabled and the Sask party at least started the SAID program. But then they cut parts of it to pay for their failings.

Thing is, times are hard - but we are supposed to be living the the birth place of socialized health care in our country (Saskatchewan). Then you tell someone who has no money or ride home that they don't qualify for a ride home when they literally have no ability to get home?

In any event, from now on I will make plans to be sick instead of just getting sick. It's for the best after all, and will save the government money and me the stress of dealing with someone who has no idea how silly the words coming out of their mouth are.
SAID skpoli