The Depression Trilogy - My View 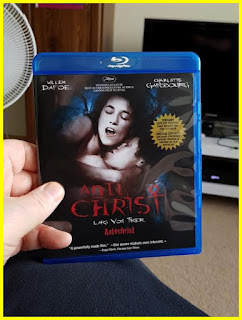 This movie is part of a trilogy called the depression trilogy. It has Antichrist, Melancholia and Nymphomaniac (Vol 1 and Vol 2)

Yes, I know, it's 4 movies. Volume 2 is not considered part of the trilogy for some reason - but I recommend watching it, as it's deeply linked to volume 1.

I have not seen Melancholia yet. I have seen the others however and love them.

Antichrist is interesting as it is filled with symbols that could be meaningless to the vast majority of people. It also literally gives away the ending with something the woman says. To the best of my reasoning the "three beggars" have the following meaning. Deer - Birth/motherhood. Fox - the suffering that is our own existence. Crow - Harbinger of the soul (death). The movie has intentionally made most of the dialog very quiet. Almost everything you see has meaning. There is more to the story in what you see than what they say. There is extreme sexuality and violence in this movie. Rated it: 8/10

Melancholia - Have not seen as of this date. Will review separate and link this blog when I do.

Nymphomaniac (1 and 2) are a rather disturbed look into the mind of a woman who does not know who or what she is and what she needs to gain pleasure. She goes into several phases in the 2 films in order to find out who she is. Near the end of volume 1 she does realize what it takes to give her pleasure and this is expanded on in volume 2. There is extreme sexuality in this movie and violence against a woman that is quite hard to see for some women. Rated it 9/10

When I get the last one I'm going to set a day sometime in the next few months and watch all 4 films in a row. Yes I'm broken, so I need breaks from sitting in a chair and will have to pause between movies but it will be an all day event.

If you have violence related PTSD I do NOT recommend you watch any of these films. There are many triggers in all of them, so be warned.