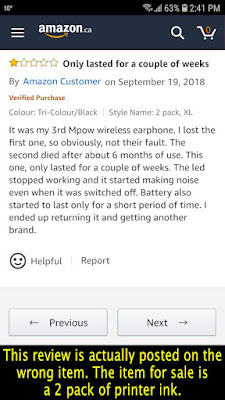 Been using Amazon for years now and have had almost no issues with things I got. Only 3 times have I had to return anything or ask for a refund. The first time was a blind I ordered and it did not have all the hardware in it. Instead of sending the mounting brackets, they had me send in the unit and sent a new one. The second time was "fortune cookie Pusheen" a bootleg stuffed toy from China that was an obvious knock off. The last time was a $1.85 item that never got here in the mail.

So I've noticed that now and then there will be a review like this one shown in the screen capture. They refer to the wrong item and I have to wonder how this happens. You see when you have a list of items to review, it shows an actual photo of the item and the name of the item. So how they clicked the wrong thing I don't know but - yeah I'm sure it happens now and then. LOL.

The best 1 star review I ever seen though was on the "6 inch Pusheen plush". That was LITERALLY the title of the item for sale. Now the review stated that it was fine, but smaller than expected. Kind of wonder how you don't know what 6 inches is, but oh well. The strange thing is in the dozens of reviews several of them said "smaller than expected".

Sure sure LOLS though, "Haribo gummy bears 5 lb bag". Holly shit LOL are there some good ones in there. Things like "I eat the entire bag and had the shits for days". HAHA. It's like people are either stupid to the point they should not be left alone, or a lot of them went out of their way to make fun of the big bag of candy you can get.

Amazon is not the only place I've seen silly or reviews funny reviews though. On a site for extremely hot peppers I saw a 1 star review and "It burned my F*ing mouth and throat". Well it literally had on there "warning this is the hottest pepper on the market". It also stated how many times hotter than a jalapeno it was. LOL.

Amazon seems good at weeding out the fake reviews, but now and then you see some that are obvious. I was looking for t-shirts one time and on every last one I looked at was "did not fits well and lasted only short time". This was from the same profile that bothered to put a name in the name box. See if you just sign up and are NOT a bot, you have to go out of your way to have your name show up. So ya know.

There was one in town for the place I most like to go to eat. The woman said she had found a piece of metal in her soup and the waiters was very rude to her. The review went on for a very long time and accused the staff of hitting on her husband and calling her names and so on. I clicked the name and she had 7 reviews. All of them claimed the metal in the soup and that the staff was hitting on her husband and so on.

Another on a different site for the same cafe said "the waitress was a fat slut" and gave it 1 star. When I see reviews like this I always think the same thing "don't count that one, as they are mentally ill or just a dick".

I remember on site for rating doctors the GP I was using at the time and my entire family used at one time - Mom and I for decades, had a very bad review. The person ranted on and on how bad he was and that everyone in his family that stayed with him was dead. See the commonality most of the time with crazy people is the reviews are massive and don't have a flow to them, they are just anger.

I did see one for one doctor in town that simply said "he accused me of being on drugs". Well this doctor had accused 3 people I know of the same thing and none of them had ever done drugs in their life. In fact one of them even after a report said otherwise, was still accused of using drugs. So year, now and then a bad review is a good thing to listen to.

In general, most of the time if there are a lot of bad reviews I won't get that product. But I make sure to discount the crazy 1 star reviews.