SUMMER TRIPS TO THE MOUNTAINS 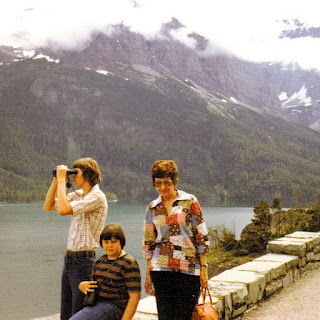 I don't seem to have any photos of us in Fernie at all, so here is one in the crows nest pass.

We would spend every other summer for a long time in Fernie B.C. staying in a crowded trailer with family. They had a lot of kids you see and it was rather fun to be with a large group.

There was one time I remember when we had some fireworks. My brother shot one off from a rock and it fell over before it went off. It flew straight for the road and just as it blew up over the road a RCMP car came around the bend. The dang thing went off right in front of the car. Well they hit the breaks and we took off into the bush.

We never did get caught thank God and even though it was hard for me to keep a secret when I was that age, I never did tell Mom and Dad. I don't know if they found out but nothing was said. After all there was a hoard of other kids with us that may of spilled it to their parents.

There was for most of the time we went there a mountain with smoke coming out of it in several places. I forget the name of it, but it was a coal mine that set on fire and it burned for decades.

There was also a mountain called the 3 sisters I remember. I seemed to be stuck with how it looked and every time I went I wanted a photo of it, but my folks never did take a lot of photos you see.

There was a number of trips into the woods and along the streams them days. It's not like now where you would not allow you kids to go off into the bush for fear of them being taken. The place was not nearly as popular as it is now you see.

I remember going out for dinner to some cowboy restaurant and sitting in the back (on the floor) of this station wagon they had. My Uncle would have to put a key in and roll down the window then drop the tail gate to let us out.

We did fish every trip there, but never did catch anything although others on the stream seemed to be catching fish. Then again in all the time I ever fished I did not catch many of the darn things and that spanned 20 years.

I also remember watching the bears eat in the garbage dump. This was awesome to a kid, but my folks where less than impressed at this hill billy kind of entertainment.

We took a trip to see the Mine a couple of times where my Uncle and several of his kids worked. They thought they would be set for life working there you see. Then the market for coal dropped off and they all lost it all and the pension fund did not pay out.

Still they managed to end up traveling all over the place some how. I remember my Dad wounding how the hell they had money for that.

Never ever did go skiing and in fact we never even saw the mountain that had the famous resort on it. Later in life when I was busy working for a living my folks ended up going there many times and eating in the fancy place on the ski hill, but us kids never saw it.

The last time any of my family went out there, Dad was long dead and Mom went with my Aunt. She ended up having a heart attack and had to be air lifted to Alberta (Calgary I think). I was freaking out over this. I had no way on earth to get to her and I was so worried. In the end it was fine and she lived a great number of years after that. I remember she got a little dog statue in the gift shop there for me on her way home. I also remember the trouble it was to pay off the $7200 bill for the flight.

Now that I'm old nothing on earth seemed as good as the time we spent in the mountains or on the farm for vacation. Nothing gives me the same joy as those days. I've been all over the place over the years and still never found that feeling we had as kids playing in a place that was not home. Now there is only the memory of it.