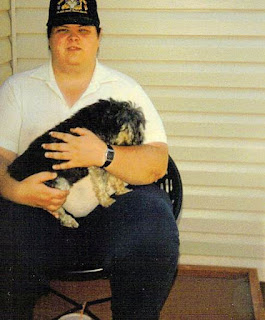 This is Chico. He was my dog for the most part. He would want to be picked up as soon as I got home and held for a while. He was a suck to say the least LOL.

I would take him for a walk and knew his turn around point. The thing is, he would demand that we keep going instead of turning around. This would end up with him eventually wanting to be picked up and carried home.

There was a dog next door to us there named Tiko. They would run up and down the fence line then stop and touch noses and wag their tails at each other. Now and then Tiko would end up at our place for a couple days as the owners went away. This was heaven for both the dogs.

He loved the car. It did not have to be my car, any car would do LOL. Thus you had to watch him as he would go with anyone who offered.

He had back issues in his older days and would step down a step on the deck and stretch his back and it would pop all the way down. Mom hated that sound, but it made him feel better in the mornings.

In the end he ended up with cancer and we had to put him down. It was the second hardest thing I ever had to do in my life. The hardest being signing the papers to stop medical intervention for my Mother when she was herself dying of cancer.

If I remember, Chico liked about 21 years with us and I don't know how old he was when we got him. So he had a good run and had a kinds life.

He had a deep fear of guns for some reason. If he saw a riffle, he would go and hide. He was not afraid of my Dads side arm for some reason though. Thunder also freaked him out rather badly and there was nothing you could do to calm him down.

He had this thing where he would bark his head off if you had a door or gate between you and him, but as soon as the door or gate opened he would your friend. There was literally only one person in all of his life he did not like "Brian". I don't know what the hell it was as Brian was a nice guy. A bit of a red neck but a nice fellow. The only thing I can think of is he smelled like diesel all the time.

We never put him in the kennel when we traveled, he came with us and loved it every time. He never minded being in a Motel at all.

Oh yes... The drive-threw... See we pulled up to the window of the A&W when we first got him and he barked his head off. But then the food came out and he got something yummy to eat. After that point, he loved the drive-threw and never barked again for it.

The strange thing was he could drink with a straw. I've never even heard of a dog doing this before. I had put my drink down and he started to suck on the straw and drink some of the coke. I was actually amazed by this. You could hear him suck on it and see the coke come up every draw on it.

He also loved olives but not the pimento inside it. He could literally spit out that part. Before then I had never seen a dog spit before, but I did see one other do the same once after.

I miss being able to have a pet. Maybe this is one of the reasons I play with my stuffed cat Pusheen. It gives me an outlet for that desire to give love to an animal. But then again I never pretended Chico could fly like I do with Pusheen, so maybe I'm just old and going batshit or something.

Interesting side note, I dated a guy named Chico for about 2 months one time in the 1990's. Also on a side note a guy named Dave owned Tiko.