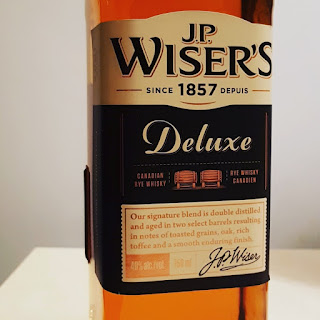 OK I got into this stuff last light kind of hard LOL. But here is what I thought of it.

The nose was mostly chard oak and had a hint of clover to it and the old familiar scent of rye.

The taste starts out with a hit of chard oak then rolls to the rye, corn and barley taste. There was a strong hit of honey after that and a finish of toffee on the end.

It was smooth but more like a bourbon for taste than a rye. I enjoyed the hell out of it BTW.

It was on sale for $20.99 and ended up after the absurd amount of tax we pay on booze to be $24 and change (forget the exact amount and tossed the bag). I used $10 in air miles on it so it was $14 and change for me to bring it home. The sale price was $6 off if you are interested but it's over today, so good luck with that LOL. Got it at Sobeys Liquor store in Moose Jaw.

I give it a 7.5/10 I've had better for the price but it was very good. I have no idea why my Dad hated Wiser's in his day, but he drank Bacardi white rum - so obviously he had no taste buds in his mouth.