Avira Warned Me of a Spam Call 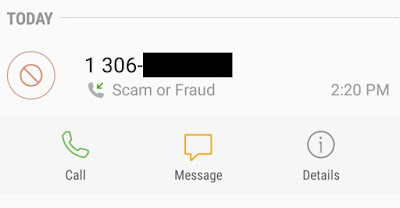 So I have Avira on my phone and I like it enough to have the pro version. With Avira you can have it show things like above on calls coming in. Sure enough they wanted money. Now I'm not mentioning the group, but I know they do all their fundraising threw local events in the locations they are set up. I've never heard of them using a call center or anything to solicit funds before. So I emailed the group and sure enough, they actually WHERE using this service now. So it all turned out to be above board.

Still you never know. All I can think is that a bunch of people got calls from this number then used the report feature that it has. I don't tend to have money to give out often and this month not much at all sadly. But I tend to do any giving directly to a group if on the rare occasion I do that.

It also seems to have stopped the spam texts I used to get at least twice a month. I just no longer see the texts at all. So I'm impressed with it.

There is also support for Chrome browser and I like that a lot. I also got the cleaner as it does things the cleaner that Samsung has in the settings does not get. I paid a small amount to remove ads from the cleaner as well. All in all I don't tend to click links on social media unless I know where they are going and trust the site - so I am safe enough. Still I want the extra bit of protection. You never know after all.

Anyways I recommend the hell out of their product and they are NOT from some shady country known for spreading spyware threw antivirus programs. I use a different program on the PC as it comes with my internet provider. Before I switched to that one I did use Avira on the PC as well.