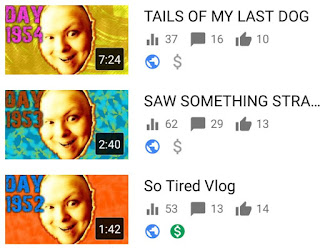 So over there at the bottom, there is a green circle with a $ in it. This is supposed to mean that the video is monetized. Well the deal is I have literally never set one to be monetized.

So I go and look and NOPE it's not turned on at all. So I turn off my adblocker and go to the video and no ads on it. So now I know something has messed up.

The next day (2 days after I posted) it says it's been demonetized (a yellow $). Well I tap it on the phone and it tells me to log into it with my PC to find out why. Well there is nothing in my account saying anything about it LOL.

Now this was taken on day 3 and it's back to saying it's monetized. So I'm all kinds of confused by now.

I do know that they are messing with the bot that tells if a video needs to have the ads removed, but this does not explain this for my case. It does however explain why a bunch of people I know have had a pile of videos restored to monetization with no mention of it to them at all. Then again there was literally no reason for Google to remove the ads in the first place LOL.

See it's not at all a simple bit of code. It's actually a bunch of very complicated bits of code that are supposed to work together. The thing is they sometimes cause each other to not work right. Like when windows broke the webcams for over 20,000,000 people.

But now there is the 10,000 people they hired to review videos and comments. I have a bit of a worry about this, but that's another story... Have a good one all.