Build Your Own Burger Buffet at R&S 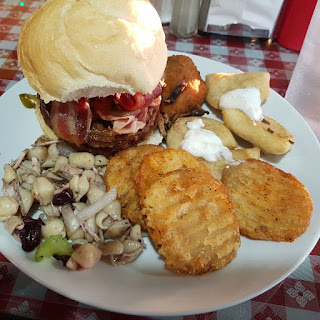 OK So this was out at the R & S Family Restaurant in Moose Jaw. They had a Build Your Own Burger Buffet.

I got 2 kinds of cheese on the burger (it's hiding but it's in there), 2 patties, ham, bacon, sauteed mushrooms, pickled Jalapeño peppers and topped with some ketchup.

Just peaking out is some fried chicken. It was some of the best fried chicken I've had as it was not too oily or over done - it was just right.

Then there was some perogies (fried) with some sour cream on them. They where as usual fried with onions. Some people don't like them fried and prefer boiled - but I think they are better fried although they are harder to chew on this way.

Next some kind of potato things - not seen this exact kind before and don't know it's name, but they where seasoned and very good.

Last we had pasta salad with some black beans and onions and celery. Think this would have been a bit better with olives instead of black beans and a bit of olive oil and vinegar dressing on it.

There where several other things out but I don't remember them off hand as I only made the one trip up. These days I really can't eat more than this and this made me over full and slightly uncomfortable - but it was freaking worth it.

There was some fruit and at least 2 kinds of desert on the table as well. My friends went up and got the desert and more chicken - but I was too full for that, besides sugar hates me (triggers my fibro 50% of the time I eat it).

This was an epic time out with my friends and we had a great deal of fun. The only bad thing was I had to cut it short as some woman dripping in perfume came and sat beside me at another table and I literally had to leave - I had no choice, it was making me sick as in causing me breathing issues. They ALWAYS have to fine me in an empty room and site near me - it's always that way... Like when a cat goes directly to the person who is allergic to it.