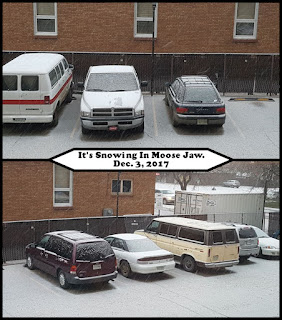 Well this was 3 days ago when it started to snow in our general direction. We still don't have much even though the weather said we where going to get a bunch last last. It never happened, but the roads got nice and slick though. 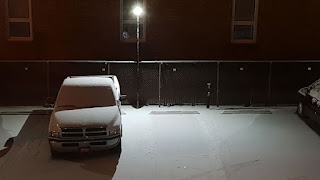 This is the night after the above photo was taken, there is a bit more snow now, but not a great deal, maybe 1/4 of an inch in total has fallen. Normally by now we would have more then this.

It keeps getting warm outside and melting the snow so it does not stack up like other years. Heck some years we had a couple of feet of it by now.

I remember as a kid the one day we got 6 feet of snow (some time in the 1970's) and school was closed for a week. Well it took 6 days for the province to dig out from that one. I remember opening the back door and there was snow all the way up and no way out.

We really don't get nearly as much snow as we did when I was young. But now and then we get a good dump of it. Most of the time it blows away it seems as we tend to get a lot of strong winds in the winter.

One time in May we almost got stuck out at a truck stop (maybe 20 years ago). We went for coffee and there was only our table and one more. Well being MAY I was not expecting snow. We got busy playing a word game and then I saw it - snow to the bumper of my friends car...

Well we where toast it seemed. Then the other booth that had people had an issue. The Mother of the guy yelling for help was having a bad seizure. Well the waitress called for help and they sent a snow plow to lead the ambulance there.

We had to go around the waitress station to get past the poor woman to follow the plow back into the city. Well it turned off before we got home, but we never got stuck. The city seemed to have half the snow as out on the north service road, so we got lucky.

It's not unusual for us to have snow in May, in fact the average is 1.1 inches. Most of the time by then it's nice weather, but now and then not so much. Our winters are long and can be very cold. In fact it went to -56 C one day. But that's another story.