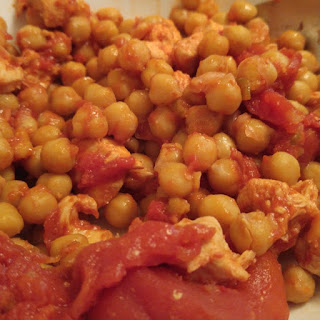 So this is Chickpeas, a can of tomatoes and some chicken breast that was cooked up in advance. I added a bit of water to the mix and let it bubble away. I then sat down at the computer (right next to the kitchen) and watched a couple of YouTube vlogs. Next thing I know I hear the sound of my food burning. Sigh. Seems this stove is hotter by far than the one I had last and I need to get used to it. So I added more water and watched another vlog and sure enough by the end of the vlog there was that sizzling sound again. At this point I just took them off the stove and tossed it in a bowl and had at it.

Tonight I am going to try and use the oven for the first time. Lets see how that turns out shall we? I normally put in the chicken breasts and some water and toss it in there at 350 for 30 min. They are small bits of meat so this is time enough. When I get the bigger ones I toss them in for 45 or 50 min. I will have to see how it does and cut into them before I go to eat them so I can see if it's cooked all the way threw.

The fact that it is hellish dry in here might be an issue with the water evaporating way faster than other places I have lived. So I hope I am not treated to the sound of the smoke alarm going off. It is one of the wired into the wall ones, so I do not know if it is networked with the main system. 90% of the time they are not, but one place I lived was and it was a nightmare in the middle of the night when someone came home drunk and burned the food.

As well I never had a stove that had two dials to cook in the oven with. It says bake and broil. Well I honestly don't think it's bake I want so I will try broil. If that burns the chicken I will know better then won't I.

Meanwhile I am on cup number 3 of coffee in my Pusheen coffee cup. I love this thing and I might just cry if I broke it. Literally, I am attached to it that much. See I have a big ass hangup with Pusheen everything. I have a Pusheen large stuffy on the fridge and a kitten stuffy on the night stand. Well Pusheen literally means kitten BTW. I also have the book and am thinking if I can get the sticker sets some place that I don't have to pay for shipping I will decorate my desk with them. Anyways I am straying off topic like I always do. Have a good one all.