Getting Used To A New Bathroom 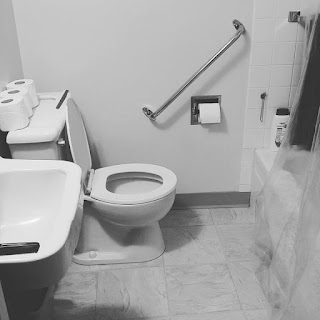 This is the first time I have NOT had the toilet parallel to the tub. I know that sounds strange but here it is... For my entire life the toilet has been 90 degrees from the way this one is facing. You would think that in my entire life I would have had a bathroom like this one. Nope... Strange that. There is also a sad lack of storage in this bathroom so the TP extra rolls need to end up on top of the toilet tank. I have also always had a vanity to put things under the sink. So now I have the bowl cleaner in the broom closet and the TP on the tank. The lack of space around the sink has me at a loss and in the need to get used to not having things just right there. Instead they are in the cabinet behind the mirror. So when I have to shave or brush my teeth I need to open the cabinet and get things out. Again you would think that in almost 50 years of life I would have been exposed to this situation as well, but I have not been. This is also the lowest walled and lowest standing tub I have ever seen. It is almost on the floor and the walls are very low. I literally will never be taking a bath as my knees would not allow that to happen. Even with the grab bar in there I would be toast. The shower is also a bit to get used to. I need to put a spare towel on the ground beside the tub to catch water that drips out when I shower. I have never had that happen before as well for one reason or the other. I think it has to do with the tub being half the height as any other one I have used to shower in. One more thing is the towel rack is at the end of the tub and I have never had that happen as well, in all these years it has been beside the tub. The one beside the sink is not great either as it is one of them ring things and it's a bother to dry my hands with it like that. One last thing, the door. Well in all these years the door to the bathroom has always gone into the bathroom and not out from it. So all in all this is the most foreign to me bathroom ever. But I am getting used to it. At least the door is wide. The last place I was in the door was literally more narrow and any door I had ever had to use. To the point that I had to go in sideways.