And This Is How The Government Works

October 11, 2016
September 29th called Sask Health and changed my address. October 3rd called the Supplement People and gave my report and was told I no longer qualified. Well was expecting that 100%. If you watch my Vlogs every day you will know I said several times that I think it will be taken away as the rent here is so very low. Even though it's supposed to be linked to "disability supports" in my case... But that's how it works... 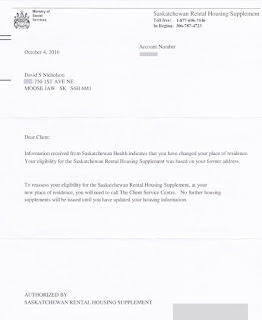 October 4th they send out a letter saying I "need to call them or be cut off". Ya know, a day after I called them LOL. This is also just how it works. 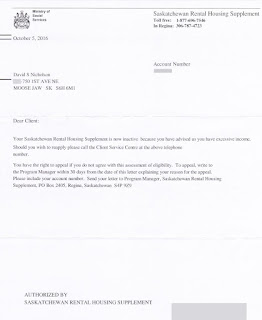 October 5th they send out a letter saying I no longer qualify for "excessive income" although it's because of the low rent being below the trigger point to get the subsidy by literally $1. This is also just how it works. LOL. Ya know - literally only one letter that they send out instead of having two on file to send out, as that might confuse the poor government worker.

BTW they set how much the place I am in can charge for rent for people on the SAID program (disability). So of course it will be $1 under the trigger point to get the subsidy. Again, just how it works.