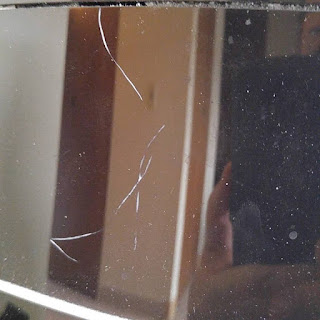 So this is what the face of my PC looks like, sigh. After the move I noticed this dang annoying scratch on it. Everything else was perfectly fine but this and the fact they did NOT centre the chair in front of the TV and I can't manage to move it myself. I did ask them to centre it and they moved it a bit but I failed to notice it's not even close to being centred. The scratch is a pain in the ass. The case for this PC was made for this PC and will can not be replaced with a new one. The motherboard is proprietary to this dang case and won't go in another one. There is also no way to order a case for the poor older thing. Someone said, claim it on insurance. Well that would be a pain in the ass as a case is worth $60 tops and my deductible is $200, so why would I bother. Not like I can get one that will fit in the first place. Well this is what happens when disability pays the lowest bidder to move you. You get people who don't really do the job the best. At least they did not mess up the TV or my monitor. That would have been a very big piss off and they would have seen me in small claims after that. Being it casts $100 to file a claim now, it would not be worth it for the case.

BTW I recently thought of maxing out the memory in this thing as I have 24GB in there and it maxes out at 32GB. I looked it up online and the best I can do for this older memory is way out of whack to what I paid for the 16GB that I put in the get it to 24. Man I thought electronics got lower in price as they got older. I guess I was wrong. LOL. I mean it is 3x the price I paid for 16GB. I doubled the graphics card power when I put in the extra memory as well. This thing only came with a 1GB graphics card and I got one from a friend who buys in bulk as he does custom builds and it was not expensive. There is now a 2GB card in there with more than twice the performance stats. It helps for rendering video and going 3D renders with Bruce and Poser.

LOL that reminds me I had someone on YouTube saying to me that a graphics card does NOT affect video render performance. LOL. Nice try kid... There is a reason that PC's that are designed to do a lot of video rendering have more than 1 GPU in them. The best ones actually have 3 of them and they are more top end than I could afford for an entire computer. But you can't argue reality with people who are sure they know it all. The fact that the editing software actually recommends a good GPU is beside the point I guess. LOL