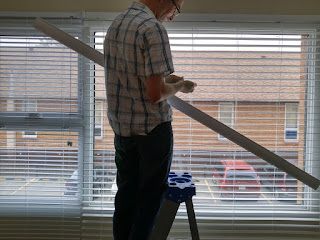 Finally got the blind up on the window. The first two went up quite soon after I got settled in. But the bit one here needed to be ordered in as it's longer than anything Walmart carried. The one in the bedroom and the little one on the opening side of the living room window where easy and fast to do. This one on the other hand was a pain in the but from the word go. First off I got it delivered and they just left it in the entry way. So I had to go down and get it. Then my friend came to hang the dang thing and there was no hardware with it at all. Sigh. So I had to go to the bother of filing a complaint with Amazon and then getting the replacement sent to me. First thing I did when it showed up was to check if it was all there and it was. So after the weekend was over my friend came over to hang this one up. Well we got all the mounts for it put up and realised that one of the centre mounts was in the way of the string in one part. Sigh. So down comes the blind and more holes knocked into the wall above the window. Then it all worked out smooth from that point on. Now I can block out the sun (if the clouds ever go away) in the after noon and also walk around in my skin without someone at the church across the way panicking. I could have got one for all the way across but then I would have to raise a massive blind every time I wanted to open the window. Also I do want an air conditioner to be in there sooner or later (got to save for one), and that goes in under the part that opens (you need a special tool for this). They charge us $30 to put it in and take it out in the fall. You can't really do it yourself as the ledge outside is slanted and needs a special bracket as well as the special tool you need to get the window out in the first place. I am told it gets hellish hot in here in the summer, so I do want one. The blind will keep some heat out, but not all of it. I can't stand to be too hot, and it's actually dangerous for my health. My friend here wants $125 for his old A.C. unit that was only used for three months. I might take him up on it, but it has to be in April as there is a GST rebate then and I really can't afford it otherwise. This GST (this month) had to be set aside for my Insurance payment next month. That reminds me, I have not even told them I moved. Oh well will do it come pay day or soon after when I can get a ride then and pay them for next year. I have no idea why I did not get it during a GST month in the first place, but oh well. January GST is mostly spoken for as I will need new shoes and so on by then and a few other things I want. I don't think it will be hot in here before April anyway - well not that hot. I don't know when install day is, so I might have to end up getting one sooner rather than expected. We will see. If so I will have to owe the money or borrow it from someone. He knows I won't screw him out of the money.