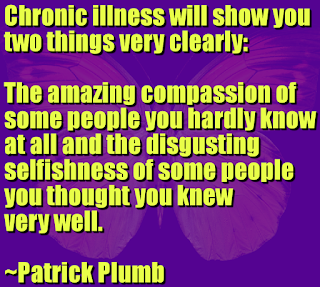 In a great deal of cases this seems to be true. The sad thing is most of the time it's family that turns it's back on someone with a Chronic Illness. You have no idea how many friends have the same story as I do.

When I became Chronically ill 18 years ago I was all but cut out of my family. Only my mother and my one Aunt had any compassion for me at all. The rest of the family literally stopped talking to me and treated me like I was dead. The sad thing is, I'm not alone - others in the family had the same thing happen to them as well.

Cut to the rest of the world and random people. A great deal of people I don't know at all or I have never met in real life, treat me like a human being and with respect. They help me when I need it and have kind words when I need them. They are the polar opposite of my family.

I had 2 long term friends not understand at all as well. There are people I had known for most of my life. They literally where no help to me at all most of the time when I needed someone. Yet friends who where a lot more recent, came to me aid every time I needed a hand.

A good example was the one friend wanted to be PAID to vacuum my carpet for me when I was too hurt to do it myself. This was the end of the friendship and I realized he was never an actual friend but just some guy I had known for a long time.

Another example was a person I had know for over 20 years not wanting to drive me to the hospital when I had injured my knees. The guy was more interested in playing on Facebook than driving me to the ER and I ended up be taken by someone else. The result there was once again the end of the so called friendship.

A great deal of people I almost never have contact with over the years have been there when I needed a helping hand. As of late I have had several people donate small amounts of money to me online. These are people who only know me from my Vlogs and where kind enough to toss some spare cash my way.

Being on disability is a crushing task money wise as you don't really get much. So I was more than happy for this. It allowed me to catch up on some things I needed to get and provided with entertainment I would not have been able to afford otherwise.

Some people I know (most) don't have the money to give, but they are always there with kind words and support when I need it. They will listen and know the right things to say.

Family on the other hand will look away if they pass me in the store and pretend I don't exist. All the good family are dead and the ones left are not people I would bother to even talk to. Sigh.

Lets talk about random people on the street now. I have had people on may occasions help when I needed it in a physical manner. Hell one time I fell in the street and a cop did not stop at all, yet some random young teen helped me to my feet and walked me back to my apartment.

I've had people on many occasions when I was shopping and in a lot of pain, ask me if I was OK and offer to help me. Family on the other hand would not have bothered at all.

I have to say when Mom was alive I hid the fact it hurt like hell to take her shopping from her. I'm kind of glad she never noticed I was in a great deal of pain some times. I would not have liked to have her think that she caused the pain. So I tried my best to hide it and it worked.

This is another issue. We get used to the pain and we get used to not showing it. This saves a lot of explaining to people you see. So we end up in a doctors office or the ER and they don't think it's serious because we are not acting like a person who is hurt. Well, we are used to not acting that way LOL. So no pain meds for us.

Actually I'm about done with pain meds. They do nothing most of the time in the first place, so why bother. But it has put me in a place with a shoulder that is not in good shape and a doctor who thinks I'm either faking it or it's not worth a referral. Sigh.

In any event, you can see the original point is, the quote is quite true. Hugs and love.