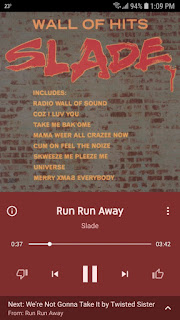 This is how the play interface looks. It shows you cover art and the song much like other streaming services do. It's a much cleaner look and feel than Google Play Music I have to say. You can as you see, like or dislike a song. You can also share it to social media or put it in a playlist. There is automatically the next song on the album or a related song that will play next. You CAN turn this off however if you don't want auto play next.

The sound quality is just as good as over on Google Play Music I found. The quality on videos seems to be improved over the standard YouTube player as well, no doubt to draw you over and try to sell you the premium version. There are ads every now and then and it will nag you to have premium from time to time as well. This is the same with any streaming service though.

There is the standard text search or the option to use voice as always. For some strange reason there does NOT seem to be the option to set it as default music playing in Google Assistant as of yet. This is kind of strange to me, you think they would have sent out a patch to include it by now. So you have to tell assistant to open the app or go and open it yourself, you can't just say "hay google, play music" and have it work. BTW the voice command is "open YT Music". In the system settings I could not set it to default as well for some reason. Got no idea there. 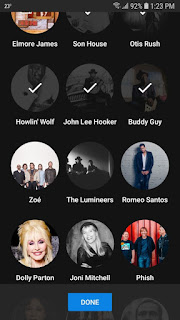 Here you see where I have liked a bunch of bands on a long list of bands. The list seems to be from bands I have looked up on my Google Account over on YouTube in the past. As well when you like a band, it springs forth several others in the list that are like that band to pick from. As always some of the "similar" bands are of no interest to me, but some where. 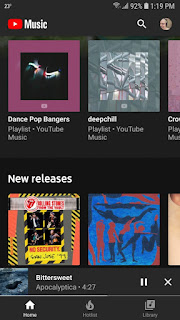 The discovery page is much the same as most streaming services. It shows you things it thinks you will be interested in and things that are popular or topical to the season or holiday. It also shows you things similar to the bands you have liked.

You put music in playlists and there is a "mix tape" of the bands you liked that you can play in order or on shuffle. You can like the songs or dislike the songs to make the predictive element of showing you music you like more accurate. 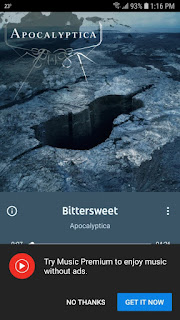 Pricing at the moment in Canada is $9.99 for a single person and $14.99 for up to 6 people in the same household. So I guess you can't share with your friends, although I have no idea how it's going to know. After all you don't always use the same network as each other in the day, now do you?

With the Premium version you get the ability to have it keep playing in the background and on the lock screen. The Free version stops when you switch apps or lock the screen. You also don't get ads with Premium and the ability to download the music to your phone to play offline.

It's the middle of a month right now and I'll be going premium on the 1st of next month. You (like most times) get the first month free to try it out. Being that I am more than happy with the interface and sound quality, I'll keep it as my streaming service. I was going to go with Google Play Music - but there is talk this is going to replace it soon and well, this is just better as there is the option for video as well as just music.

Also YouTube Premium is $11.99 ($2 more and includes YT Music) and you get the YouTube original content and no ads on YouTube. So it may be worth it to go for that. Sadly it does not include free rentals of the for rent movies - would be nice to get 4 or 5 free rentals with it.
music player service streaming YouTube