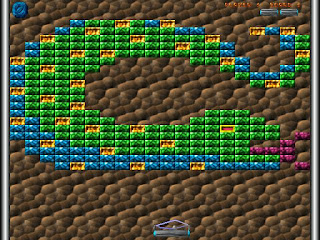 Well just for the fun of it - I edited DX-Ball 2 and found where the number of balls are. Took like 7 tries though LOL. That being said, I deleted the 9 man version because I don't think it will be fun without the very good chance of NOT completing any of the games LOL. BTW I'm not telling you where it is (like any of you care). The simple way is to use cheat engine BUT that don't work on this old computer so I had to actually think.

Rival Ball is the game that came after DX-Ball 2 BTW. It came with 150 boards and is compatible with the DX-Ball 2 board packs. Rival Ball Tournament came after that with 150 new boards. But I never got either of them. I am also not sure if they work on Windows 10 or not, but it says on the site - Windows 95 and newer, so perhaps it does. I never actually tried it on Windows 10. I honestly forgot I had the game.

As for DX-Ball 2 there where several board packs with it and you could get an editor to make your own boards and your own tiles and so on. I had all of the board packs with it so it kept me busy for years. I seem to be NOT good at the game anymore and can't get past level 5 on any of the packs LOL. I guess you do forget how to play old games.

We made a bunch of super hard boards back in the day, but I don't have them any more - No idea how you even backed them up actually.

BTW you could also change the place where the game subtracts a man when you die by changing it from a 1 to a 0 and it will literally be never ending men. Cheat engine works by allowing you to edit how many lives you have, if you where wondering.

One last additional note, you can edit or change the sounds in the game for sun results as they are standard Wave files. I remember we did this back when and it was rather fun.