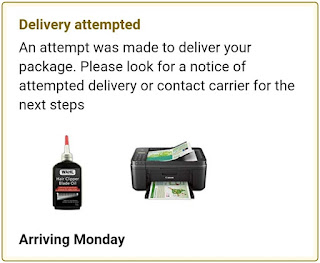 So had to file a complaint with Purolator. I literally sat here all day the other day waiting for my package to show up. I was also literally watching the security camera on the front door the entire time. Driver never came here at all.

The Amazon email had showed it arriving on Monday (was a Friday it came). Thing is, the driver did NOT reschedule it for delivery at all, he dropped it at the Depot downtown and they called me to come get it.

So I got them on Twitter and they tracked it and said they will file a complaint for me.

I had to get a friend to drive me downtown in over 90 temperatures and in the middle of a street fair. Sigh. So he had to drop me off then I had to lug a heavy package to the corner and text him to come get me. We then had to hold up traffic to load it in the car and get it home.

The fact that I am disabled and don't own a car made it worse of course. But the driver just did NOT want to deliver it. Instead like literally every single time I had to deal with Purolator they dropped it at the Depot downtown. They have never delivered to my door.

I went looking on Amazon to find a place to enter how you prefer to have it delivered, and there seems to be no such place at all. So I can't say "never use them again".

UPS on the other hand, phones me and says "tomorrow we will be there around this time". This is nice, as these guys I had to rely on the tracking info to figure it out. Canada post on the other hand 90% of the time just leaves it in the lobby when there IS a package locker there, but that would mean putting a key in my box and that would ad 30 seconds on to delivery time - sigh.