Are We All Crazy Now? 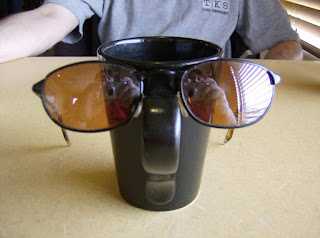 God I miss going for coffee almost every day. But it gives me way more time to watch vlogs and play on Facebook. I guess that is a good thing...

Thing is, when I did go out often for coffee it was just to not be alone. It's not like the conversation flowed and was fun for the both of us. That is what I don't understand in retrospect. That I did not fully realize what was happening here.

We would talk for two or three hours sometimes about his stuff - his life. But when I had something I thought important enough to share, he would literally ignore what I was saying and just start talking about his own life again.

At least once a week for a dozen years the topic of how his ex was controlling and manipulative and hurt him so bad by leaving him. The reality that he was describing himself, not his ex seemed to escape me on the top level. I did however realize deep inside that he was talking about himself. But for the sake of company, I would play the game and yet again comfort him.

After all in the mind of a narcissist, the world is doing them harm - not the other way around. This is how it always goes with them. They speak of the harm others do when the reality is they are the ones doing harm to others.

In the same light often people who are over the top crazy will often think that others are the crazy ones and speak of how they are the only one who has it together. Yes I know one of them as well... OK several people... Sigh...

Then there is this fellow I know who thinks he is a victim. He speaks over and over again how people are bullying him. The reality is they don't want anything to do with him and only speak of his crazy ass when he does something stupid or mean yet again.

I am talking to the point of going to the cops and telling that this person or that person is doing this and that. The part that the cops know this is not happening in reality never sinks into his crazy head. Yet to his mind, he is being bullied.

What the hell is my point here? I think it's that I seem to attract the wrong kind of bat shit crazy. But then again almost everyone I know is broken to some extent. The difference being that we tend to have fun with our kind of crazy. Well, that is, when we are not sad as hell or thinking we are about to die from anxiety.

Come to think of it, are there any so called normal people out there anymore? Seems to me that the world has gone mad. All kinds of violence and people killing others live on the interwebs. Not to mention all of those who will do anything for attention even if it causes then to be harmed.

We live in a world that has become one of endless victims and filled with the need to be a star... Even if it is just for a few days.

But by my own definition, am I the crazy one? After all - I see all this crazy and think I am the level headed one. The big difference here is, I think my friends are level headed as well. Maybe that fine line puts me in the category of "normal". But alas I at least know I'm broken and have spent a lot of time fixing myself.

In any event, life is good most days. Have a good one all and keep smiling.