When It Goes Wrong After You Call The Cops 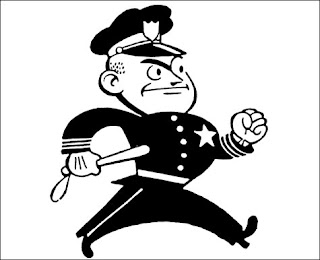 So about 25 years ago, I had a run-in with this fellow out at a truck stop we used to hang out at. Well he was a dick every time I saw him for a couple of years and I do believe he was going out of his way to be places I was at.

The rub here is, he assaulted me at the same truck stop right in front of a video surveillance camera. Instead of handing him his ass, I decided to let the cops handle it. Sure it was just a shove and some harsh words, but I had enough of this fellow at this point.

So I go to the cops and tell them my story. My first clue that this was going to go no where was when the cop said, "well I know him and I don't think he would do that". Sigh.

So three months later I get a call from some other cop saying "we are dropping the case for lack of evidence". I asked what about the video tape? He had no idea what I was talking about.

Well the place like many others had a 24 hour tape and at the end it just started to record over it. Being that I had told him about the camera catching it all, you would think they would have gone out there and looked at the tape. NOPE. He literally just filed the case and did nothing about it until it was way to late.

So rather than just let this slide I typed up a letter to the editor and handed it over to the local news paper. There where some interesting responses to it as well. Several days later I got a call from the chief of police saying they where sorry this happened to me and that the cop was "disciplined".

Later I found out that nothing had happened to the cop other than he was told "don't be doing that again". If only that was the only time the cops in this city at that time let me down...

Later on (several years later) I had called in a large party at the building next to the one I was living in. Well no one showed up. So the next hour I called again. I then called every 30 minutes until the nice man at the desk told me "stop calling".

Well the next day I was talking to others in my building and they all said they had called at least twice. So why the hell did this out of control party that went till 4 am not get a visit from the cops? I will never know.

The same month of that party I phoned in to say there where kids climbing on top of our building and jumping the small path between our building and the one next to us (from roof to roof). Well two hours later someone showed up and talked to me and that was it. Being that they could have been killed, I have no idea why someone was not sent right away.

But I am happy to report that twenty some years later the cops here are a hell of a lot better at actually responding to calls and doing their job. Yes there are a couple of them that are not all that friendly when you talk with them, but for the most part they are. I am very glad that eventually the old guard was replaced with people who know how to do what they are paid to do.