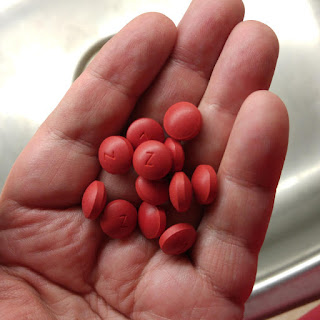 So I'm standing there with this headache and thinking why won't it give me a second pill? So I shake it several times and nothing is coming out. Well all the sudden POOF a bunch come out. Why the hell is this the norm for getting pills out of the bottle and why does the first one always come out easy? I have have over the years seen a large sample of people trying to get headache pills out of the bottle and to the same result LOL. BTW why the hell do they have a Z on them? It's not like it's a sleep aid. Well OK for people like Mom they where. But she was like 90 lbs. Should be a little relief of some guy holding their head on it. That would work better for me. The Z just confuses the hell out of me. I ain't no pill scientist after all.

This reminds me of a woman that I used to know that in the 1940's worked as a "dispenser" in a northern reserve. I have no idea if the people where this uneducated or the government was just kind of racist at the time - but they claimed that if you gave them the entire bottle of pills, they would take them all and die. This is literally what the government man told her when she started the job. They ran a general store up there and actually would take furs on trade for credit. Most of the time a good fur run in the trapping season would allow a family to have credit for the rest of the year.

Then again at the time, people up there had almost no concept of personal property. If someone bagged a moose, they split it up among everyone. If someone needed an axe they just used the one from next door. If they had not had the time to cook a meal, they just walked into someone else's home and got fed.

To me this is actually amazing. I literally can't think of a world with no personal possessions. So her telling of her time up there are interesting. BTW almost no one smoked up there at the time unlike now where a lot of people do. They only got tobacco in to use in ritual and that was not often. Now I have know many first nation people in 50 years on earth and almost all of them smoked. So a time when almost none of them did is also strange to my mind.

All I know is that we changed who they are and took away the ideals that they had at this time. We forced them to assimilate and it ended up in reserves that are filled with crime, gangs, drugs and suicide instead of people who where happy to live together. Got to wonder, who are the "civilized people"? It gives me a lot of pause for thought.