The Most Inspiring Album I Have Heard. 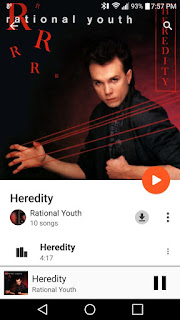 Since the 1980's I have been big into Rational Youth. the album Heredity changed how I saw music and took me from just listening to something to tap my toes to, to actually hearing the words they where saying. The images that where painted in several of the songs have stuck with me for the rest of my life. Literally when I listen to this album and close my eyes, it's like watching a movie inside my head.

If you go the their Album "Cold War Night Life" you will find track #1 to be "Close to Nature". This is floating near the top of my top 50 list. Mood and so on will change the rank of these songs but this one is always in the top 5 for me. It changed how I thought, literally change me. I saw the world in different eyes for the first time. Threw the words of this song I saw a different reality than my own. It also made me want to do poetry and to draw. This in turn lead to a life time of doing art in one form or another.

They did not release anything for some time then came To the Goddess Electricity in 1999. I randomly happened upon it in a store. I picked it up and my favorite band had evolved with the times to be something new but with a familiar feel and the masterful wording of the songs that once again painted images in my mind.

In 2016 came Future Past Tense. Once again a new direction with a familiar feel to it. It was not a bold departure but an expansion on the old ways. The masterful words once again playing to me minds eye. Soon after cam 8 bonus tracks. I picked up both the original and the bonus tracks on Google Play Music as I don't actually buy CD's any more - they take up far too much room. But if you like, you can even get it on Vinyl...

Not much else to say that it's a great hope of mine to see them live one day as I never have in all these years. Anyway - there is a LOT of their stuff on YouTube, they have a channel and there are lots of bootlegs on there as well. Go check them out and if you like what you hear - go over to iTunes of Google Play Music or Band Camp and give them a go in a lot better quality.