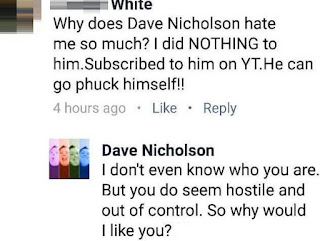 So this was actually on my OWN video. First sign the guy is crazy is he comments on MY video and is talking like he is talking to someone else about me. No it was a stand alone comment, not a reply to someone... Sooo...

Second thing is I had literally never seen this person in my entire life and he had literally just subscribed that moment then posted this comment on the latest video I had up. Kind of makes you wonder don't it?

I have had this saved for a few years now and just came across it and posted it on Facebook. So a person I am friends with knows this fellow in real life. He tells me this guy is all about being a victim. He goes threw life making up scenario's where people have done things to him and the all "hate him".

It's to the point I am told that his family has told him to get lost and leave them alone. I mean when you are so crazy that your family won't help you any more, where do you go from there? Well obviously to random people on the internet and claim they hate you.

There is this fellow in town that is just like this fellow only more crazy. He is also a thieving cunt asshole Twatt. Lets call him Mr. H - Well Mr. H goes around telling people that a service organization in town that has helped a lot of people out in the LGBTQ+ community was founded to wreck his life. I wish I was kidding. He literally tells people this.

See he also goes around telling people about the members of the group (by name) and how they show up at his work and tell his boss all kinds of stories then he gets fired.

Well here is the deal, when you are crazy and can't control your mouth or your actions and you literally don't think you are doing wrong when you ARE - it's kind of easy to get fired.

Then there is Mr. K - Well Mr. K Latched onto me after years of not seeing him. I was on the mental ward for depression and there he was in all his glory. Well I befriended him as he was a person from my past and so on. I have to say I did not really remember him that well. He kept to himself at the time.

Mr. K then started to show up at all manner of the day or night to "talk". It always had to be about him (see where this is going). Best thing is, he did not want advice - he just wanted to go on for 3 or 5 hours on how his life sucks so bad and he is all alone.

He was also one of these people who has to prove he is super smart to everyone when in reality most of the things he does are really stupid. Like when he started to phone me at 3 am and make the stupidest nuisance calls not once thinking I would recognize his crazy voice. BTW if Mr. K sees this blog he will call the cops on me (I'm not even kidding).

After I realized he was never going to be less crazy and that he was in fact a CUNT, I told him to fuck off and never talk to me again. Well since then he has called the cops one me - sat in my parking lot at 2 am for 30 minutes at a time - and left stupid comments on my vlogs about me "judging people". See it's ALWAYS about me judging him. The reality of me not thinking about him till he does something stupid never sets in.

The list here is endless so I won't go on. I have to say, every last person I know online and in real life is not quite normal. Most of them are broken in some way. Some mentally and most physically. There is an overlap of course. I have to say that ALL my friends are the good kind of crazy though - the fun kind. The that post will put you in Facebook jail kind. LOL. So all in all it's all good.