Not Going To Stave No Matter What My Brain Tells Me 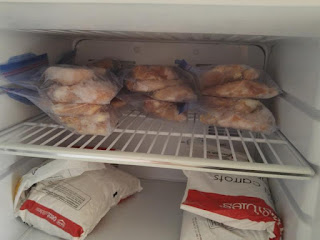 8 days before I go shopping again and this is what I have left. I have repacked the chicken to be gone on the 8th day. Otherwise there would have been 16 days of it left. It is getting old and I want to use it up. It's good to do this now and then so you don't get stuff that is freezer burned. 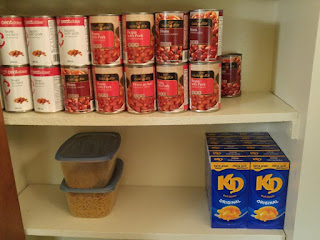 Here we have 45 cans of beans and 12 packages of KD. Not to mention a bit of pasta that I might just toss out as it's been in there for 3 months now.

I been on the bean diet for over a year now. It sounds silly, but I have lost a pile of weight on it. This last 3 months however have been a bit of a loss as I keep going up and down and have actually gone up 10 lbs over all in that time... Sigh...

I'm trying to get back on track, but I got to get rid of all these carbs first. Then perhaps we can get back to trying hard again. I really don't want to waste the money I spent on the KD. So I will eat it.

But I got off track. The entire purpose of this vlog is that yesterday I had this overwhelming anxiety that I would run out of food. Well I get paid in 7 days and will be shopping in 8 days - so I don't think I will be running out. On a positive note, I will save some money on food as I have a LOT of beans left. On average I eat beans for 2 meals (2 cans a day), when I am sticking to the bean diet. The other meal is veggies and chicken. Lots of veggies.

I have stupidly spent a lot of money eating out this month and have wasted it in that respect - but in another respect I had good times with good friends. Still it was not to plan as it where... Anyways next month back to it I hope. I also want to try and save up some money - this may never happen, but I want to at least try to.