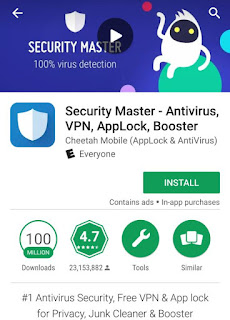 In a word annoying. I could not find a way to turn off some of the features that will nag the shit out of you every 30 seconds. I mean seriously it wanted me to clean the storage 7 times in 1 day. Sigh. It would have 300 MB of "junk" in it and it would be asking to clean it. Well here is the thing, you use Facebook for 12 minutes and there is your 300 MB of "junk" it wants to clean. Not to mention this "boost" crap - it seems to be using 4 X more processor time making sure apps are not using processor time than if I just let it run. It's supposed to SAVE battery life and in the end was eating up battery life faster than you ever. Then again every battery booster I have tried did the exact same thing - they are bull shit. As for "Free VPN" I don't think it was of great use and not so easy to actually set up a VPN on an android phone - so... Unless it's click this and it's done, 1/2 the users won't bother with it. I also wonder why everything under the sun has "App Lock". Ya know... If you don't want people to snoop threw your Facebook then put a freaking password on the dang lock screen. Most of the time with a lot of "all in 1 security systems" they nag the crap out of you for one thing or another. At least it was not telling me over and over that my privacy is at risk like several other did. I have to dive this thing a 2/5 just for being over the top annoying with "time to clean that memory" and not having the ability to tell it to get lost for good like. All these features are of no use to most users and the only reason most people think they actually need them is they keep telling you that you need them. Simple is what I want. As for anti-theft, Google has this on Android now - you just have to go to your google account and look for your phone. No need to give Ops to an app... If this was Facebook I would be asking for a like for my lack of use of paragraphs and proper grammar :) - Anyway, have a good day eh.