The Illusion Of Reality AKA Welcome To The Future 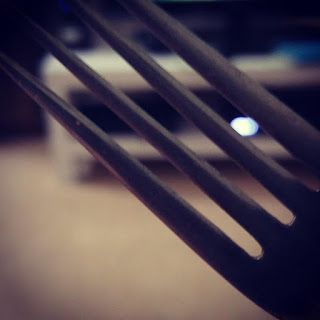 Perception is not always reality but it is the illusion of reality. We see things most of the time as we want to see them and not as they are. This has become the "reality" for many people in our western world. Instead of facts showing the way, they follow what they think should be and that becomes reality.

For example the fork in the photo is actually silver but because of the lighting it looks dark gray. For some this indicated that 100% for sure it is dark gray. The media presents us with images and ideas they they want us to see as true. Thus most people look at them and say "this is reality".

If the media says "these people are here to kill us" and the reality is that they are here to escape being killed back home - then the illusion of reality that people see is terrorists not people looking for a better home and wanting to live in peace.

This goes way further in some cases - in fact in many cases. I have had it myself where I know what I said was the reality of the situation and can back it up with valid evidence and been told "google it and you will see THIS is how it is". The fact that the majority of people now will take something as absolute fact because it conforms to their system of thought, make it reality to them. They go in search for "evidence" that they are right and are validated when some other wingnut says the same thing.

The internet is filled with them. They will literally argue to the family of victims of the Sandy Hook shootings that no one died and they have been brainwashed. In their world it was all a ploy to take away their guns. When no one came to take their guns reality still never set in and the lie that they want to hold to was still reality.

The ease of exploiting such minds became evident when Trump stood there frothing at the mouth about gun rights and the evil of Islam invading the holly land of Mother USA. This exploration of hate led to a tension between people of the USA unlike ever before. Now people who used to be close literally hate each other. All because they where validated.

This works on both sides of course. The left exploits the fact that most of it's members think that Trump is the devil and wants to destroy the world. Thus he has been demonized.

The reality is in the middle and almost no one is willing to see it. Thus the illusion of reality is reality. Perception becomes real to the mind. Fact is fiction and evidence is a lie. We live in a new age where no information can be passed without judgment on it. Common sense is ignored and concept is proven with no testing it. Welcome to the future people.