Carts In The Garbage Room Are Breading 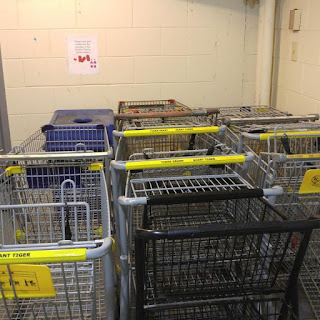 7 if these cars are NOT ours. The ones in the front (farthest away) are ours. The Giant Tiger ones are NOT and the black one and the one in front of i are not ours. Kind of wonder if now and then they get someone to take them all back to where they belong. They been gathering for some months now. I think it's the same person leaving them here and not taking them back. 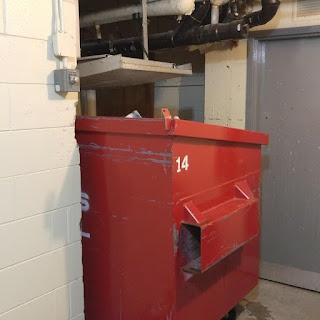 This is the garbage bin under the shoot. It's full and more than likely the next time the cleaners are in - it will be switched out for the one outside. It seems that some people think the recycling bin is a trash bin and/or don't know what we can put in the recycling bin. They now have signs up. I like being able to recycle. The last place I could not. 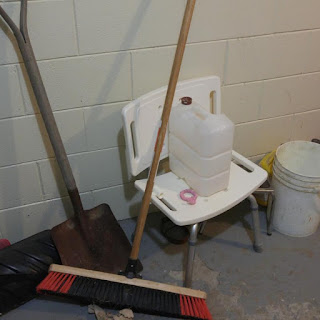 This is a bath chair. They normally end up going back to the government depot in Regina, but this one does not seem to have their sticker on it so it's sitting in the garbage room. I got no idea what is in the jug - it's not labeled.

I'm just glad they now come in the daytime to do the bins for a while after I moved in, they did them at 5 or 6 am. What a bother that was as it woke me up every time - it's kind of loud and on my side of the building.

There are all kinds of interesting shots to be had around here. Maybe one day I will play a little more.