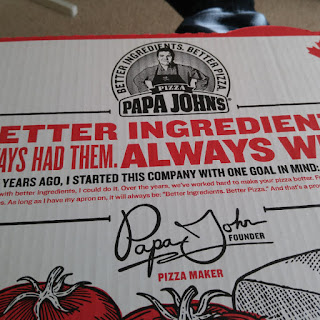 OK this put me in a bind with money for a few days, but it was freaking worth it. I saw a 30% off online code and took advantage of it. I got the Ultimate Meat Pizza (large) and it lasted me 2 days of eating on it. Yes I am one who really don't mind cold pizza. When they started I had a problem with the pizza being cold when I got it, but they seem to have worked out the kinks as it where now.

The pepperoni was dry as a bone - it's the way it should be if you ask me. The cheese was kind of light but the crust was very nice compared to Domino's. I have signed up with them on the web site. But I don't really dig the points system. You seem to need to order a large amount of food to get enough points to get anything.

The peppers are a nice touch as I like spice. I also hit it with a pile of Franks Extra Hot sauce. The garlic butter that comes with it is nice for the crusts and you don't end up wasting them - but it's not great the next day in the fridge.

There is also the bonus that they don't charge you $1 for interact at the door like almost all other places do. 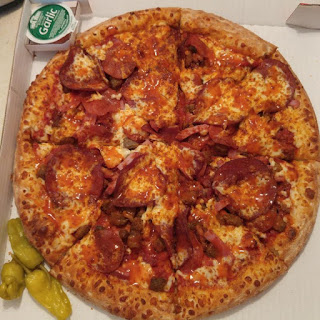 All in all I am saying this is a 7.5 out of 10. If there was more cheese and the sauce has more taste to it it would have been a 9. I still like Rodoes here in town for pizza. It's much better if you ask me but ok so not healthy as it's dripping with grease. I do recommend Papa John's to anyone. They store here also has a all you can eat pizza deal that my friend likes a lot.