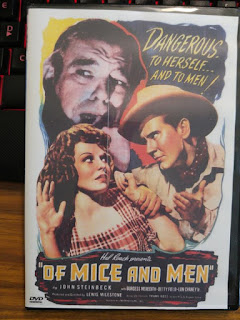 Of Mice And Men is a 1939 movie directed by Lewis Milestone. Writers John Steinbeck and Eugene Solow based on a book by John Steinbeck. Staring Lon Chaney Jr., Burgess Meredith and Betty Field 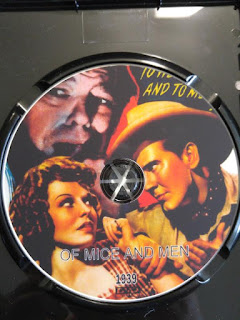 Typical of the time this is a very dramatic style of acting and Betty Field shines in her role in this movie. But the acting of Long Chaney Jr. and Burgess Meredith are of the top caliber.

The setting is in the depression era ranch where two misfits looking for the chance to start their own farm get in trouble. The movie starts with the two main players running for their lives and hopping a train.

This is a look at mans inhumanity to man and the fact that the one character should never have been in this situation to start with is important to the plot. But he is part of it as no one else would take care of him but his friend.

In the end a tragic ending taints the fact that the money is in place for the farm and the kind hearted manner in witch this tragedy is presented is of mixed feeling. It is in fact a soul crushing event for the one going the deed.

If you have read the book (and you should) then this might be a great complement to it. There is a 1992 remake of this movie and I don't think it has the magic that this movie has as the characters are not as dynamic and the acting more subdued.