And You Charged Me Too Much 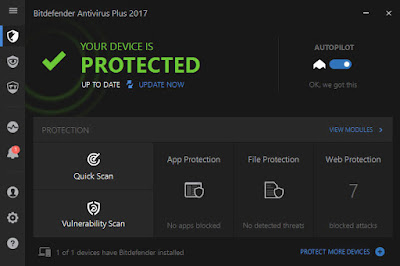 So they had this deal and the web page told me Bitdefender Antivirus Plus 2017 for one year for $19.99 CDN. The problem is as you can see above in the screen cap from my PayPal it charged me $19.99 USD in stead. Well Canadian money is wroth a lot less than US money so I ended up paying almost $10 more for the product in the end. The regular subscription is $39.99 CDN a year and if they are going to charge me US money when they say they are charging me Canadian money this will no do. For one thing the exchange rate is different every day and I can't plan on the expense. The other thing is they actually lied about what currency they would charge me with.

So I go over to my account on their web page and it's telling me that the program is not installed on any PC. Well WTF? It's running on my PC right now. This is kind of not a vote of confidence at all. As well, you see where it tells me "web protection 7 items"? well those are all links from my Email that lead me to a site I help moderate and it for some strange reason has the Notification bot we use blocked - you click the link and it redirects you to your site. Sigh... So After trying a bunch of times and not knowing why it won't go threw I realized it was being blocked by B.D. So I had to make an exception for it... This was a LARGE pain in the ass.

I like the product and it has almost NO memory load at all - this is GREAT compared to every other AV I have tried. But if you are going to tell me you are charging me in Canadian money and you actually are charging me in USD I'm not sticking around to hand you out extra money because you can't handle it.

On a positive note B.D. is about the highest rated for protection. But I'm going back to Avast Free after this thing expires. It's good enough for me. I don't need the protection level that this fancy thing gives me as I don't tend to do banking on here or go to risky sites. In fact I almost never click a link on Facebook as I know most of them have dangerous advertising on them. I also run Adblock Plus and it kills about 90% of the ads on the net.

I'm keeping Bitdefender on my phone though. It's a bit over $1 a month but I think it's worth it. When I upgrade I might go back to Avast on the phone but that won't be for 4 more months or so. See Avast needs to be set up as an administrator and after a freaking fermware update I have lost the ability to do that on my LG G4 and I have tried it all to fix this but... It just won't work.

In any event - I would be sticking with Bitdefender if they actually did what they said they would do and charge me in Canadian money.