Here We Go Again With No Internet 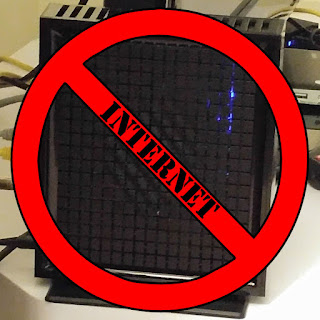 OK I live in a building that has Shaw open WiFi in the common aria. I also pay for nice fast internet and I pay a lot for it.

The thing is, it seems to go out quite a lot at the same time of night for about 20 or 30 minutes. Sometimes it's out for an hour.

There is no mention of this in the service announcement page ever. So why is it going out so often and why at 12:30 am almost every time. Almost to the second most of the time.

I've gotten all kinds of excuses about "interference" from outside transitions. Well that would be fine and dandy if it was my tablet or my phone as they are WiFi, but it's also ALWAYS my PC that is wired to the modem.

The other fact is, it's not just mine. There is as I say the open WiFi in the common aria of the building. This is just under where I live (the floor below me). The WiFi is not that strong and is a week signal but I get it. The fact that it vanishes off my list of WiFi connections that the phone or tablet can see tells me - it's NOT just my apartment or equipment.

Talking to a couple of other people who tend to be up at night they tell me the same story. This would be indicative of a problem with the way it's delivered to the building. But WAIT. I have had Shaw internet for about 3 years now and only lived here for 5 months.

Guess what? I had the exact same thing happening to me in the old place and often Tweeted about it dropping at night complaining that that is when I tend to be using it. So there goes the idea of it being just my building.

On the other hand I never had speed issues in the old place - not once. I have had issues here and it only started five days ago. I noticed it uploading slow to sites that are normally very fast to upload. Doing a speed test the upload speed was 3 or 4 instead of 15 or 16. The strange thing is, the download speed literally only tested low twice.

Now the thing here is if you have a malfunction some place the norm is for both speeds to drop. So how the CRAP this is even happening I don't understand. The speed thing seems to have pissed off now that the nice guy on the Twitter help desk did what ever the hell he did. But there is still the outages that don't seem to be posted in advance and seem to be happening at about the same time every time for the last 3 years.

Here is another kicker, I have seen other people in other cities complain about the same thing. About the same time. So is this some kind of auto funtion that is happening? If so why the crap are we not told it can and will happen?

I am not just playing on my blog in the middle of the night. I update a couple of web pages at night as well. So to have an update fail can cause me to say a few bad words out loud like.

Granted I'm not being paid for this and I literally have nothing better to be doing. But that is NOT the point. The point is, this should not just be happening with no warning. If it is NOT something they are doing, why the hell is it always about the same time.

Now there are sometimes outages at night that happen later on like 2 or 3 am (yes I am up then as well). But the majority of them are at about 12:30am. But I can't bitch too much as when I was with Sasktel there where literally 4 to 8 interruptions a freaking week. Most of them in the day time. That being WORSE as all the normal folks who are not up all night are using it in the daytime.

In the end I would 100% still recommend Shaw over Sasktel any dang day. I pay $100 a month for 1TB of bandwidth, 150 down and 15 up. Sasktel would set me back a big pile of cash more to get a 20 up speed. As well I would have to own a freaking house, as there are literally NO fiber connections in any apartment buildings or condo's in Moose Jaw with them. SOOOO...

Yes I don't need no 1TB of bandwidth as the most I ever used is LESS than 200GB. I also don't need no 150 download speed as I almost never download big files and to stream HD you only need 15 down on the worst of streaming sites. Hell some will let you do it with 5 down. The difference being compression ratio. The ones who need more speed also suck way more bandwidth.

So why do I pay $100 a month for this shinny fast net? Upload speed baby. I upload HD video to YouTube literally every day of my life. Sometimes 2 or 3 times a day. Just don't get me started on how the last 3 days YouTube has only taken the upload at 1 or 2 NOT 15... Sigh... Other thing is, the ability to be downloading on the PC, watching an HD movie on the TV (streaming) and playing a game on my tablet at the same time.

Lets end this with the silly nature of all these words and all this time spent complaining about losing a thing most people in the world will never be able to use. Not to mention I am on disability and able to pay more for the internet to keep me entertained each month than most families in the world make in a month. #FirstWorldProblems...

Peace out - Dave :) P.S. this is exactly the same modem Rodgers uses and the exact same kind that burst into flames over in Ontario a while ago. Click HERE for the story...