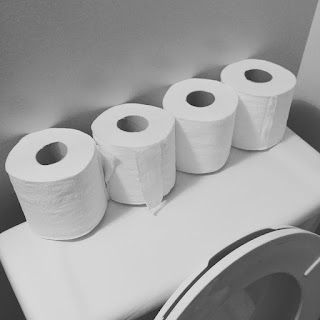 Yuppers, I am ready for the curried chicken tonight. LOL...

Actually I am just one of them people who are OCD enough to think "what if I run out" - then takes it to the level of putting out 4 extra just in case it all goes wrong.

My aunt had this knit poodle that went over a roll of butt paper and sat there on the tank in it's pink glory for as long as she was alive... Well as long as I remember, I am sure it was not always there.

Over the years I have seen many of these knit things over a roll on the tank actually. Some where seasonal - a Santa or and Easter bunny for example. The vast majority of them where poodles though. Then there was the one time there was the knit bottom and a half a Barbie doll on top. That one was kind of disturbing as I was at a friends place and drunk off my ass.

Now lets talk about the empty rolls. I know people who use them for things and you can make fire starters out of them I have seen. I never have, but I've seem people do it. I on the other hand tend to put them in a garbage can beside the crapper until I get enough. Then I crumple a bunch together and stuff them into another one. This saves space in the garbage bag. Yes it is actually a vast waste of time as it takes weeks for you to get enough when you live alone.

I am also reminded of this fellow I used to know that lived down the block from us and I went to classes with him. I was studding electronics at the time. Well he would come to visit and literally every time needed to go to the bathroom. We figured out later that he was taking about a 1/4 of the roll off and stuffing it into his book bag to take home.

Well we never said anything as he was dirt poor. He was living on a student loan and the rent was stupid. We fed him more than a few times as well. He would never ask you see, so we would say "there is a bunch left over". So he would take it home and return the container the next day. The entire time he had to realize we where making more just to feed him - but it saved his pride.

I often wonder what became of him. A friend of the both of us was housing him after school was out in a different city. Well the guy phoned me up one day and said he had to evict him as he was not paying the rent and only drinking all night every night. The sad thing is, the last time I heard from him he was drunk off his ass saying he was fired from his job.

Oh well today I have lost track of both of them. Well I wondered off topic - so time to end this before it becomes a book. Later all...