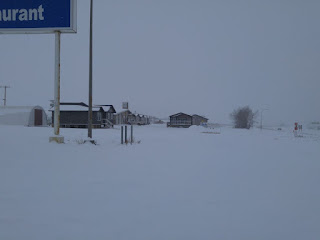 So it was a nice little snow storm. The visibility was not the greatest at times and it was dark as hell. The fact that the highway was drifting over with snow at the time did not seem to cause people to slow the hell down. We where passed several times and saw people just flying down the road while at coffee out at R&S. It always amazes me that this happens so dang much when there is bad road conditions. There was no wonder why there where 36 accidents in the aria that day.