Resist Being Stupid AKA Hold My Beer 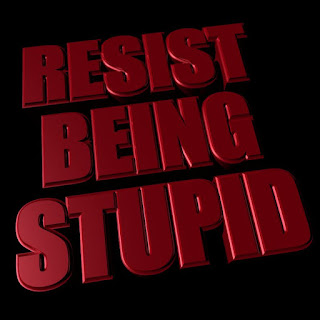 Well, it's a lot more safe when you don't so stupid things just for the fun of it. BUT... So many times a good story started with "hold my beer" and ended with "Dave, you are bleeding... DAVE?"

There was this one time I was in a friends truck and we thought it was a great idea to go flying over this mound of dirt. Well we saw sky, then grass, then sky, then grass and so on. When we got the truck stopped and the rush was over we realized we had hurt the hell out of out backs.

So now we are both in the ER trying to explain to the nice nurse how we managed to do this to ourselves. She just had that look on her face like "God why is every 3rd person I see the same as this one"? This was in my late 40's BTW...

It started at a young age though. I remember this one time there was this hill and a small path between two thorn patches. Well these where serious thorn bushes. I was in the back of the group of 3. My two friends lined up in front of me. Well we went flying over the hill and down the other side. This is when it all went wrong.

Next thing you know, the fellow in front was flying off his bike and into the bushes. Well the guy in front of me hit his bike and went in as well. There was no stopping it - I hit the pile of bikes and went in head first.

Being this was the 1970's and back then boys tended to spend most of the summer with no shirt on and short pants on... Well it did not go well for us... We managed after a lot of crying and screaming to get ourselves out of these bushes.

We all looked like we had been dipped in blood and it did not go well when we got home either. I don't know if you know what mercurochrome is, but it was waiting for us at home.

First Mom got me to undress then as I sat in the tub she used a cloth to get all the blood off. Shockingly most of it was from not too many holes in me (thank God). I don't really remember how many holes, but I do remember that red liquid being used on them.

Now I really was in hell, as this stuff felt like fire. Then on went the band-aids and so on. Thank God this time I did not need stitches (this time...).

I remember Mom saying "Did you learn your lesson". I said "yes Mom" - as I always did in these situations. But I never did learn to just stop doing dumb ass things until recently.

Now onto the stitches. There was this big ass steel building with all these bolts sticking out from the inside. Well to a rational mind the looks like something to stay the hell away from. Not for a 9 year old.

So I got about half way up this rounded building and slipped. Now blood is literally gushing out of me. I had a big cut on my led and a smaller on on my right wrist. Well Mom lost her shit and Dad had to take over. Thank God it was on an uncles farm and they where right there (telling me to get the hell off that thing).

I remember getting in the car, and I remember by brother saying "dumb ass" as he pressed a towel into the wound on my leg. Now like 41 years later the mark on m wrist is gone and I have to look hard to find the one on the side of me left leg. But the memory of something that should have ended being stupid remains.

Lets just say that there where many more of these stories. In fact at least once a week Mom or Dad had to patch me up. Hell it was the same year (I was 9) when I broke my spine. YUP I almost got crippled for life. See I figured I would stand up on my sled all the way down this big ass hill. Well I almost made it. Then I woke up with my friends looking down at me.

I went home and it was not for 4 days that I was taken to the hospital. Why? I was afraid to tell Mom I got hurt as she had already threatened to take the sled away and she did take it away.

Not even that ended it - as I said there I was in my mid 40's in the ER gasping for air in indescribable pain telling the nurse just how stupid I was.

You know... Looking back it's almost a wonder that I actually lived.