And The Internet Is Not Fixed... Sigh... 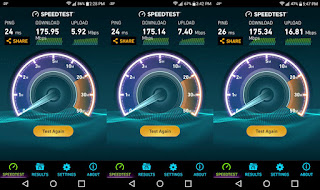 Sigh... So the tech came and changed all the connectors and put a terminator on the end of the splitter that was open. Still no luck. For a while there it was OK then the speed tanked out again, so he replaced the modem. Well that did not do it. It was good for a couple of hours then the upload speed went to hell again. I should be getting 15 hour of it and was getting between 4 and 7 for a while then it came back up to 16. This is strange. If it's something with the cable in the building then how the hell come the download speed is not tanking out? This don't make sense. At first I thought it was a WiFi thing but the PC is wired in with a very good cable and it's doing the same exact speeds as the WiFi. So ya know... Not like the PC and my phone and my tablet all went to hell at the same time. Not even close to likely. But the guy did everything that can be done in here by him. The only other thing for them to do now is send the other kind of tech out to look at the line amps and so on. Chasing down cable in a building this big could take a while as well. So ya know... This is not going to be fixed any time soon I don't think. I do not envy them the task as the lines go up the building wall on the outside and this is an 11 story building. There is a lot of wire and so on. They have done some changing of the local network in this aria of town the last while as well, so it could be somewhere in there as well. The fact is not many people use their net to upload videos and if they do, they don't tend to notice it's taking way too long. I might be the only one who noticed a difference at all. BTW the download speed did tank out 2 times that I noticed, but that is it. Most of the time it's just the upload speed.